Ferdinando Apap’s Late Brace Saves a Point for the Blacks 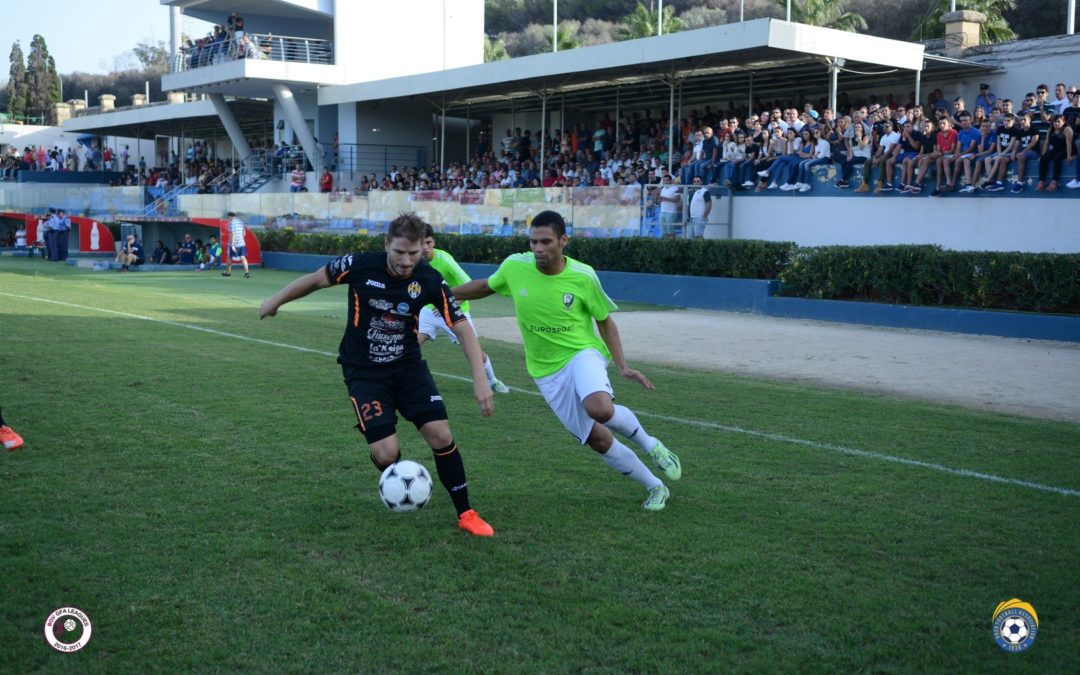 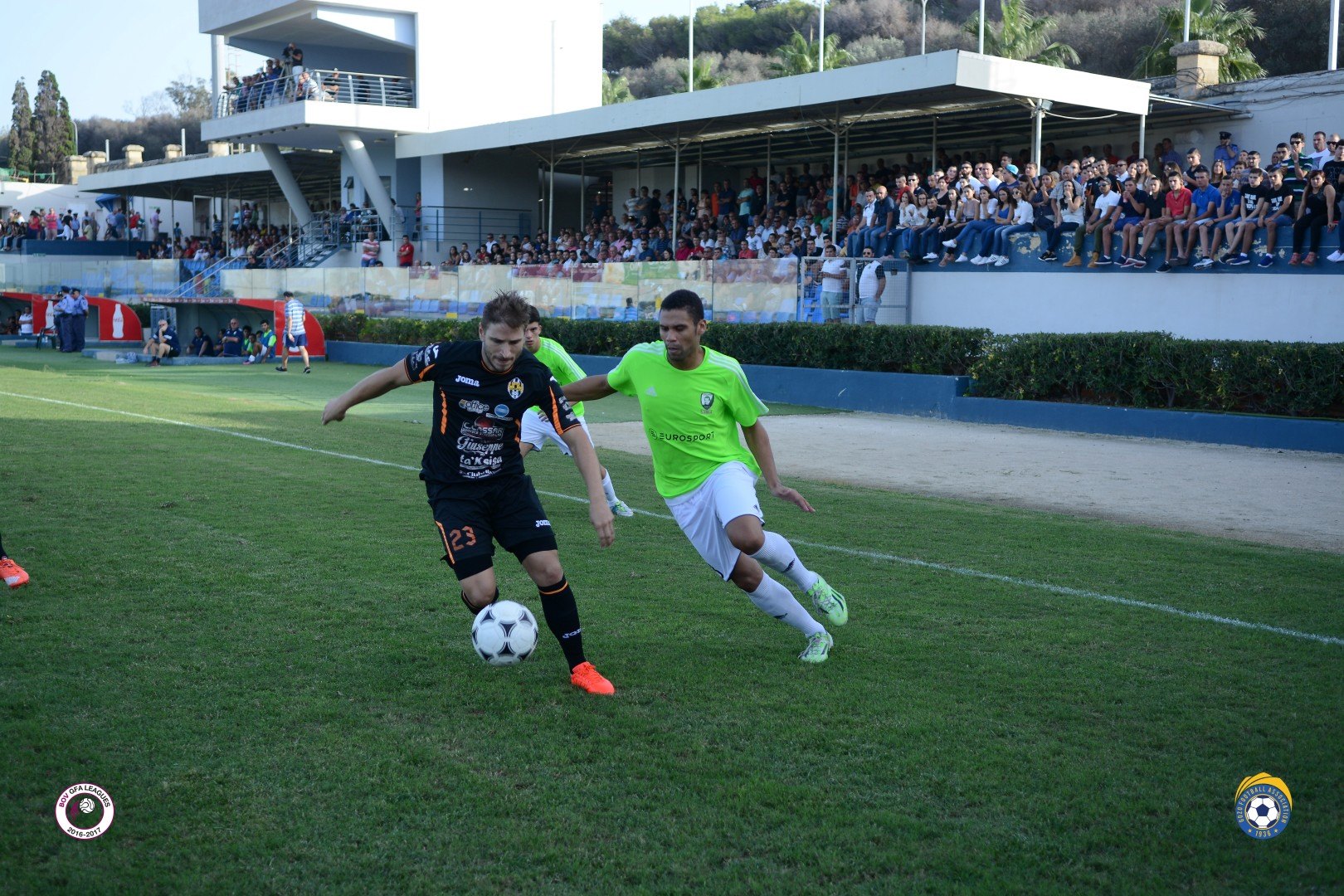 Champions Ghajnsielem managed to save a point from their match against Oratory Youths with two late goals scored by skipper Ferdinando Apap so that they dropped the first points in the championship.  Ghajnsielem, who had some regular players missing due to injuries, were surprised by Oratory’s adventurous play during the opening stages and conceded two goals during the first quarter of the encounter.  The Blacks introduced striker Raphael Kooh Sohna on the field as a substitute just after the half hour mark and his presence in attack practically turned the run of play in favour of the champions.  The match turned out into one of the most exciting matches of the championship so far this season.

Ghajnsielem struggled to recover the deficit as Oratory’s keeper Leonard Camilleri became the main protagonist of the match with various difficult interventions that denied Ghajnsielem’s strikers from scoring.  Although Ghajnsielem returned in contention with a goal that arrived just before the hour mark, Oratory scored a third goal and the Blacks were trailing by two goals until the final stages of the match.  However, Oratory compromised the possibility to obtain an unexpected win when they ended with ten players ten minutes from the end of regular time so that Ghajnsielem took the opportunity of the extra player on the field and saved the result through a brace by Ferdinando Apap in the space of two minutes.

Oratory had an excellent start and opened the score in the seventh minute of play through a low shot by Bartomeu Perello Palou following a pass in the area by Borja Polo Longarela.  Ghajnielem failed to produce a reaction as they were very weak in attack and their defence was often in difficulty to neutralise the play by Oratory’s strikers.  On 15 minutes Oratory’s scorer almost took advantage of some hesitation by Ghajnsielem’s keeper to clear the ball but at the end the defence recovered and cleared the danger form the area.  Ghajnsielem’s first attempt at Oratory’s goal arrived on 18 minutes when Emiliano Lattes passed to Chris Camilleri inside the area but the latter hit badly due to a challenge with an opponent and the ball ended wide.  Oratory doubled the score three minutes later when Bartomeu Perello Palou passed to Borja Polo Longarela inside Ghajnsielem’s area and the latter concluded in goal with a low shot.  The Youths tried to administer their lead but during the final stages of the first half the Blacks became more dangerous in their play as Raphael Kooh Sohna started to find more space to operate within Oratory’s rear guard.  On 40 minutes Kooh Sohna just missed a header following a cross by Stefan Cassar and two minutes later Oratory’s Borja Polo Longarela cleared the ball from the fatal line to avoid a certain goal following a close ranged attempt by Christian Dingli.  The Youths however could have added another goal to their lead on the stroke of regular time of the first half when Everton Felipe Da Silva Santos came face to face with the goalkeeper following a counter break but the Brazilian striker lobbed wide when the goal was unattended.

Ghajnsielem took full command of play after the break.  On 49 minutes the Blacks protested for a penalty when Kooh Sohna ended on the floor in the area following a challenge with an opponent and one minute later Oratory’s keeper Leonard Camilleri blocked a strike by Emiliano Lattes.  On 52 minutes the same Lattes released Raphael Kooh Sohna but the latter concluded wide form a good position.  On 58 minutes Ghajnsielem were awarded a penalty for a foul by Javier Polo Longarela on John Camilleri.  Raphael Kooh Sohna had his first shot from the spot kick that was saved by goalie Leonard Camilleri but the same striker took the ball from the rebound and netted with a low shot.  Ghajnsielem increased their efforts in an attempt to level the score and on the hour mark an effort by Stefan Cassar following a cross by John Camilleri ended wide.  Four minutes later Chris Camilleri had a close ranged header that ended just wide form Oratory’s goal and on 66 minutes Oratory’s keeper Leonard Camilleri was called to a difficult intervention to block a strike by Raphael Kooh Sohna following a personal action.  The same goalkeeper was well placed two minutes later to save a header by Ferdinando Apap from a corner action and on 69 minutes a shot by Chris Camilleri was deflected to a corner by oratory’s defence.  On 73 minutes Oratory’s keeper Leonard Camilleri saved to a corner a shot from outside the area by John Sandoval Guarin.  Ghajnsielem lost a golden scoring opportunity on 75 minutes when John Camilleri failed to conclude from close distance following an inviting low cross by Chris Camilleri.  The Blacks were punished for the missed chance as Oratory increased their lead in the following action when Bartomeu Perello Palou operated a counter break and from his pass Everton Felipe Da Silva Santos placed the ball in goal with a low shot from outside the area.  The same Brazilian striker was cautioned for his celebrations and on 85 minutes the same striker was shown a second yellow card for gestures towards the supporters so that the Youths were reduced to ten players for the rest of the encounter.  Ghajnsielem took immediate advantage of the extra player on the field and reduced the deficit with a header by Ferdinando Apap on 83 minutes following a cross by Stefan Cassar.  Ghajnsielem clinched the equaliser two minutes later when Oratory’s keeper Leonard Camilleri blocked a strike by Raphael Kooh Sohna and from the rebound the defence failed to clear the danger from the area so that the ball ended to an unmarked Ferdinando Apap who pushed the ball in goal from close distance-  Ghajnsielem kept insisting in an attempt to take the full points at stake but on 89 minutes a effort by John Camilleri was saved by Oratory’s keeper and in the first minute of stoppage time a shot by John Cailleri ended wide. 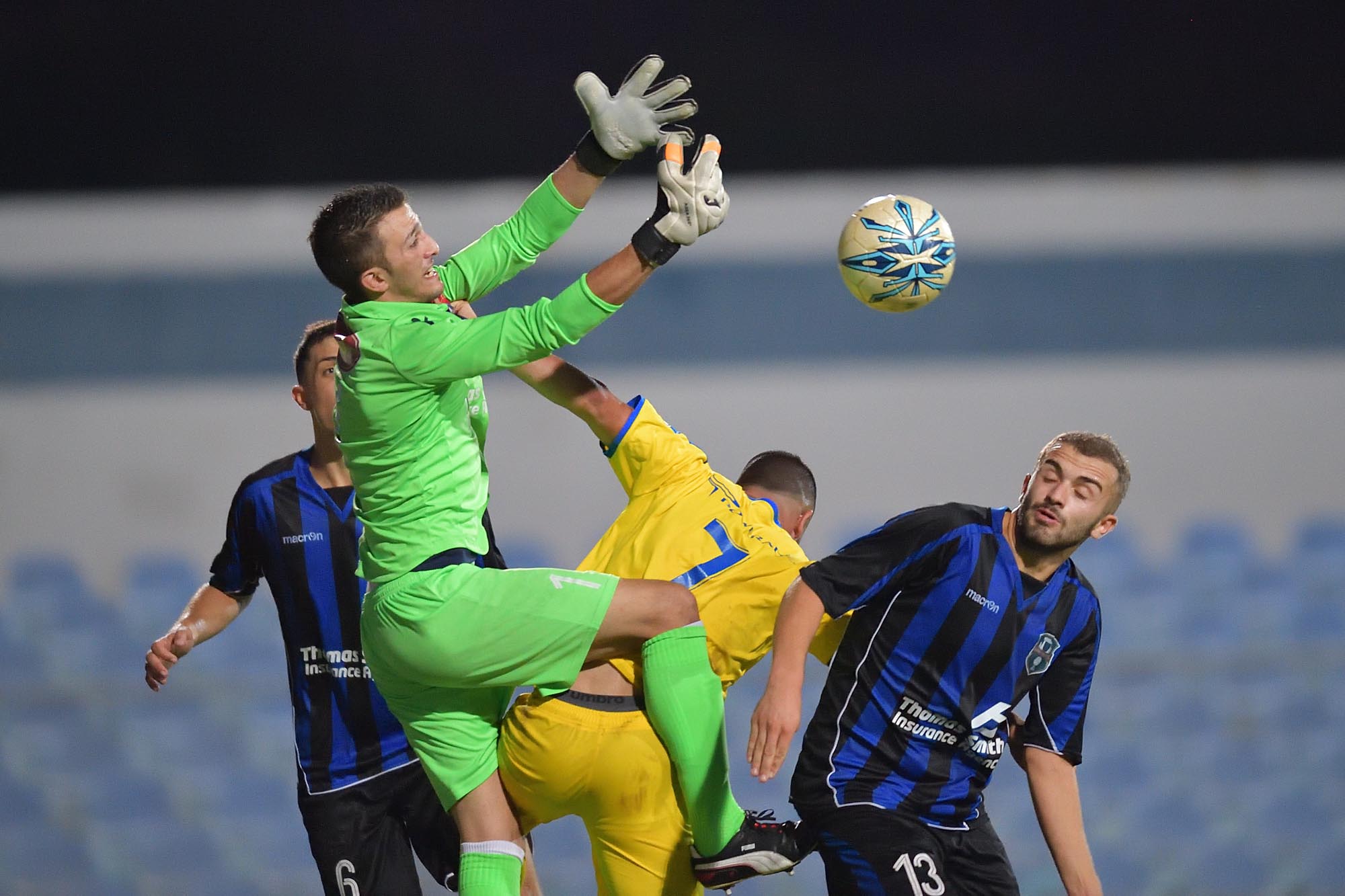 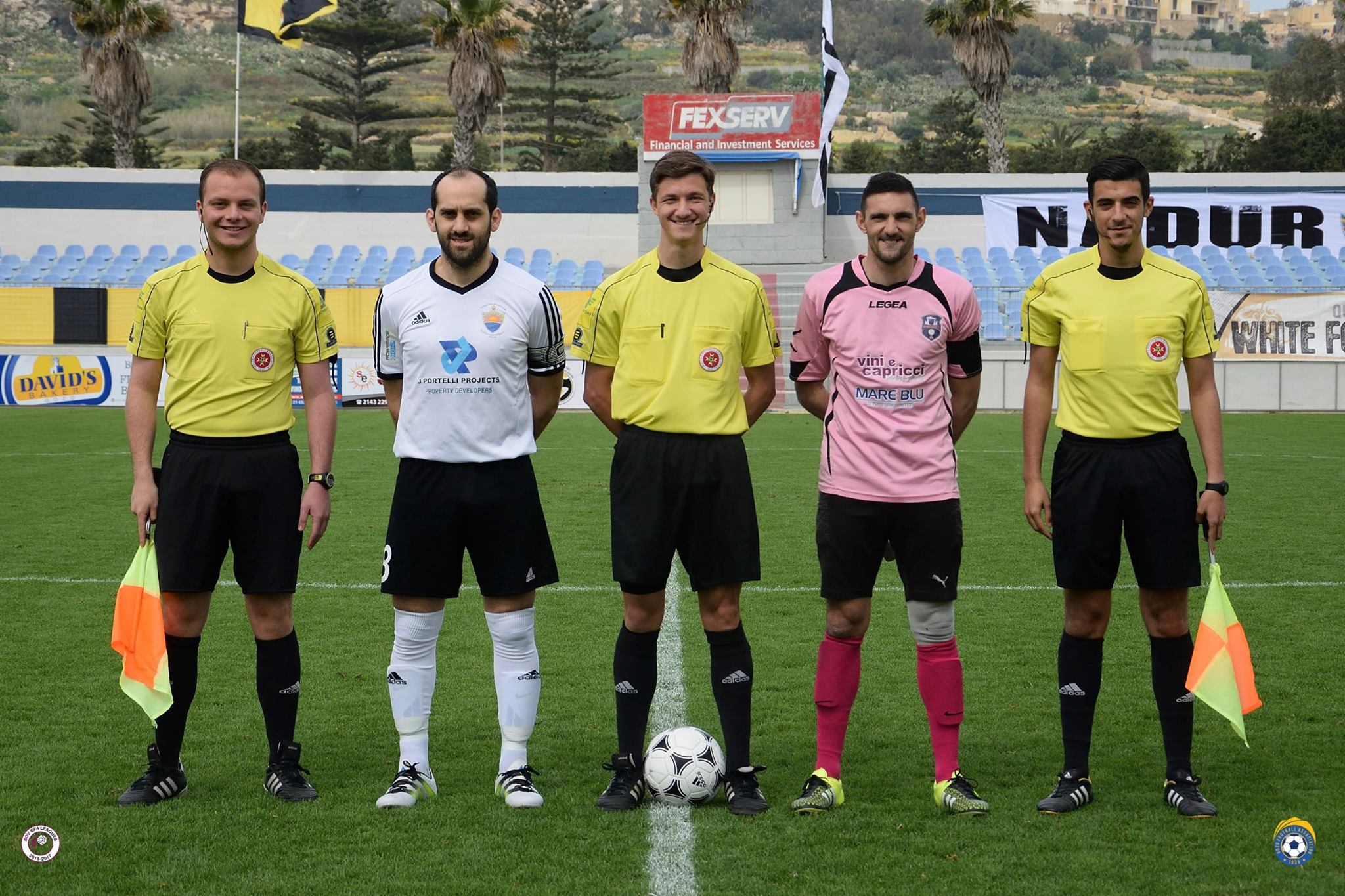 Nadur Move to Just One Point from the Leaders, Xaghra Relegated 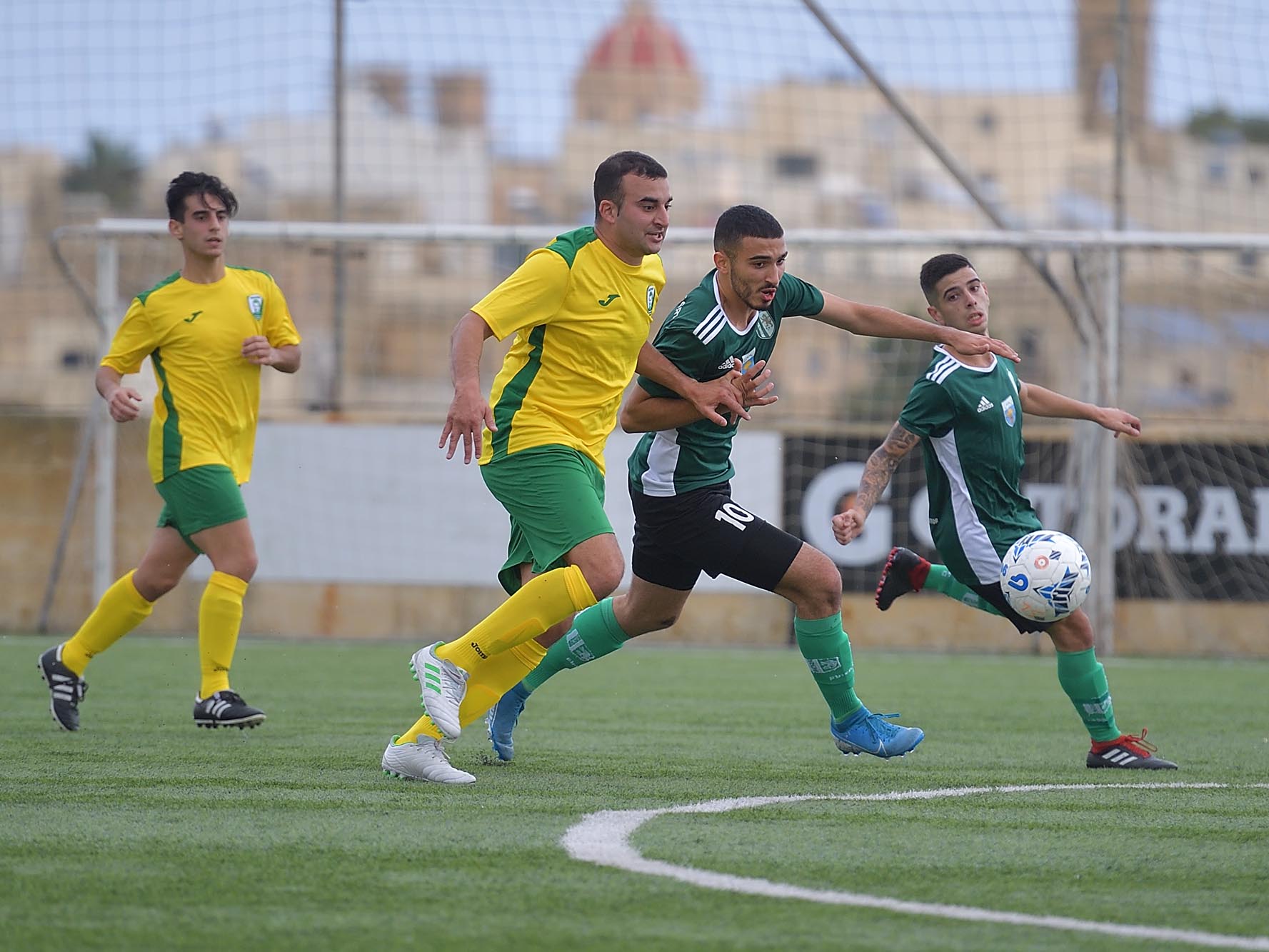