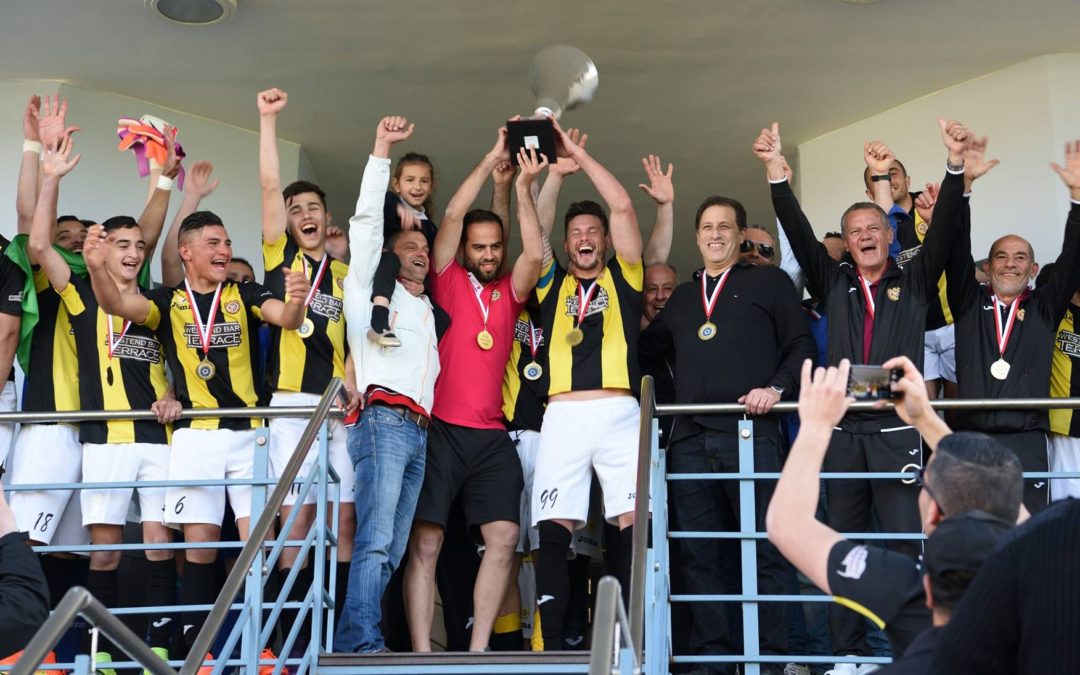 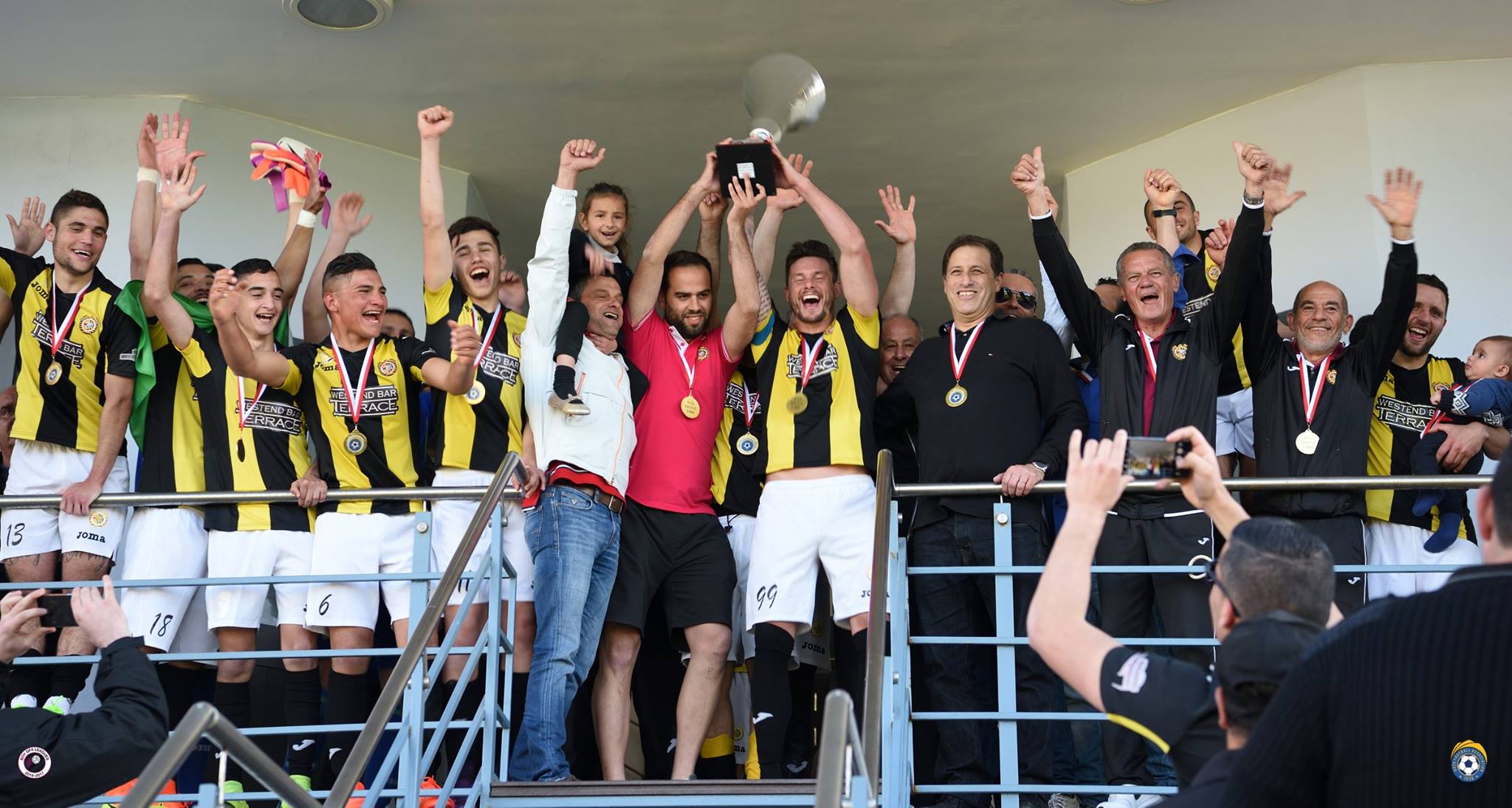 In the fourth edition of the Knock Out competition for the first division of Gozitan football Xewkija Tigers prevailed over Oratory Youths in the final and took the honour to their club for the first time.  This was Xewkija’s second major honour this season as they already won the Super Cup at the beginning of the season.

Xewkija’s win over Oratory was well deserved.  They were determined to recover form the disappointing results and performances in the previous matches of the championship and were aiming to boost their moral by winning this trophy prior to the last phase of the championship which include two direct clashed against the challengers for the title.  Oratory seemed determined to be serious challengers for this honour.  The Youths shared play with their opponents for most fo the first half but they conceded two goals during the final stages of the first half that practically compromised their chances to remain in contention for a longer period in the match.  Xewkija made good use of their experience during the second period and not only defended their two goal lead but created chances to score more goals.  The protagonist of Xewkija’s win was their Brazilian striker Thiago Melo Dos Santos who scored the three goals for his side.

The two sides seemed in a good shape during the opening stages as the two defensive departments were well deployed to neutralize the respective strikers.  Xewkija created a good scoring opportunity on 8 minutes but a shot by Shaun Bajada from a good position ended high.  On 12 minutes Xewkija’s Dene Shields had a goal that was disallowed for a foul by the same striker on his direct opponent and Oratory replied on 16 minutes through a shot form an angled position by Borja Polo Longarela that ended on the side of the net. The Youths failed to capitalize from a favourable situation on 25 minutes when defender Manwel Xerri hit badly in an attempt to clear the danger and the ball arrived to Everton Felipe Da Silva Santos who concluded wide form close distance.  On 31 minutes Xewkija went very close to scoring when Dene Shields passed Oratory’s keeper inside the area but hit badly from close distance so that defender Jurgen Attard recovered his position and stopped the ball on the fatal line to avoid a certain goal.  Xewkija however opened the score three minutes later through Thiago Melo Dos Santos who netted from a closed angled following a corner kick by Gennaro Hili that was not cleared by the goalkeeper.  On 37 minutes Xewkija were again dangerous through a direct free kick by Shaun Bajada that was saved with difficulty to a corner by goalie Leonard Camilleri.  On 42 minutes a shot by Dene Shields following a good action by Rodney Buttigieg ended wide but one minute later Xewkija doubled the score through a header by Thiago Melo Dos Santos following a cross by Claudio Frances.

After the resumption Oratory tried to produce a reaction but Xewkija managed to control play and their goalkeeper Steve Sultana was not called to make difficult interventions during the first part of the second period.  Xewkija operated with counter breaks and on 59 minutes they went very close to score their third goal when Thiago Melo Dos Santos released Dene Shields inside Oratory’s area but the Scottish striker had his close ranged attempt stopped by the crossbar.  Oratory could have re-opened their chances to recover the deficit on 68 minutes but substitute Paul Said hesitated to conclude from close distance so that goalie Steve Sultana cleared the danger.  Xewkija were again dangerous on 72 minutes through a shot by Dene Shields that was saved by goalie Leonard Camilleri.  Two minutes later Xewkija protested for a penalty when Thiago Melo Dos Santos ended on the floor in the area following a challenge by an opponent, but the same Brazilian striker passed to Dene Shields who had his low shot saved by Oratory’s keeper Leonard Camilleri.  On 75 minutes Xewkija’s goalie Steve Sultana was called to make the best save of the afternoon to block a close ranged shot by Everton Felipe Dos Santos and from the following action an attempt by Borja Polo Longarela’s shot ended wide.  Three minutes later Xewkija were again unlucky when a strike by Thiago Melo Dos Santos following a personal action hit the crossbar.  One minute later Oratory had another opportunity to reduce the score but a header form close distance by Borja Polo Longarela following a cross from the left flank ended just over the crossbar.  On 87 minutes a free kick by Xewkija’s Thiago Melo Dos Santos had a direct free kick that was saved with difficulty to a corner by goalie Leonard Camilleri.  One minute later Xewkija’s Dene Shields operated a counter break and entered the area but was floored by Oratory’s defender Javier Polo Longarela.  The referee awarded a penalty, Oratory’s defender was sent off for his infringement and Thiago Melo Dos Santos sealed the issue by scoring the third goal with his shot from the spot kick.  Xewkija ended the match on a negative note as they had Gennaro Hili who was sent off for a foul on Bartomeu Perello Palou.

After the match the Vice President of the Gozo Football Association Mr Angelo Grech, presented the medals to all players and officials and the trophy for the winner of the Knock Out competition to Xewkija’s captain Dene Shields, in the presence of the General Secretary of the Gozo Football Association Mr Tony Grech and among the celebrations of Xewkija’s players, officials and supporters.