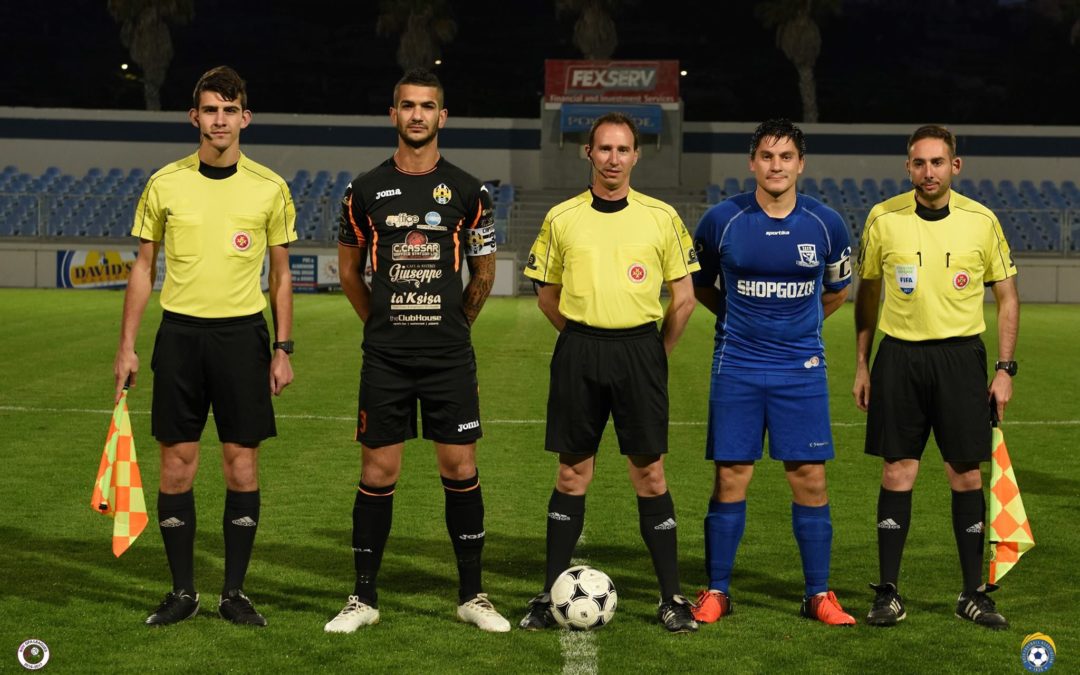 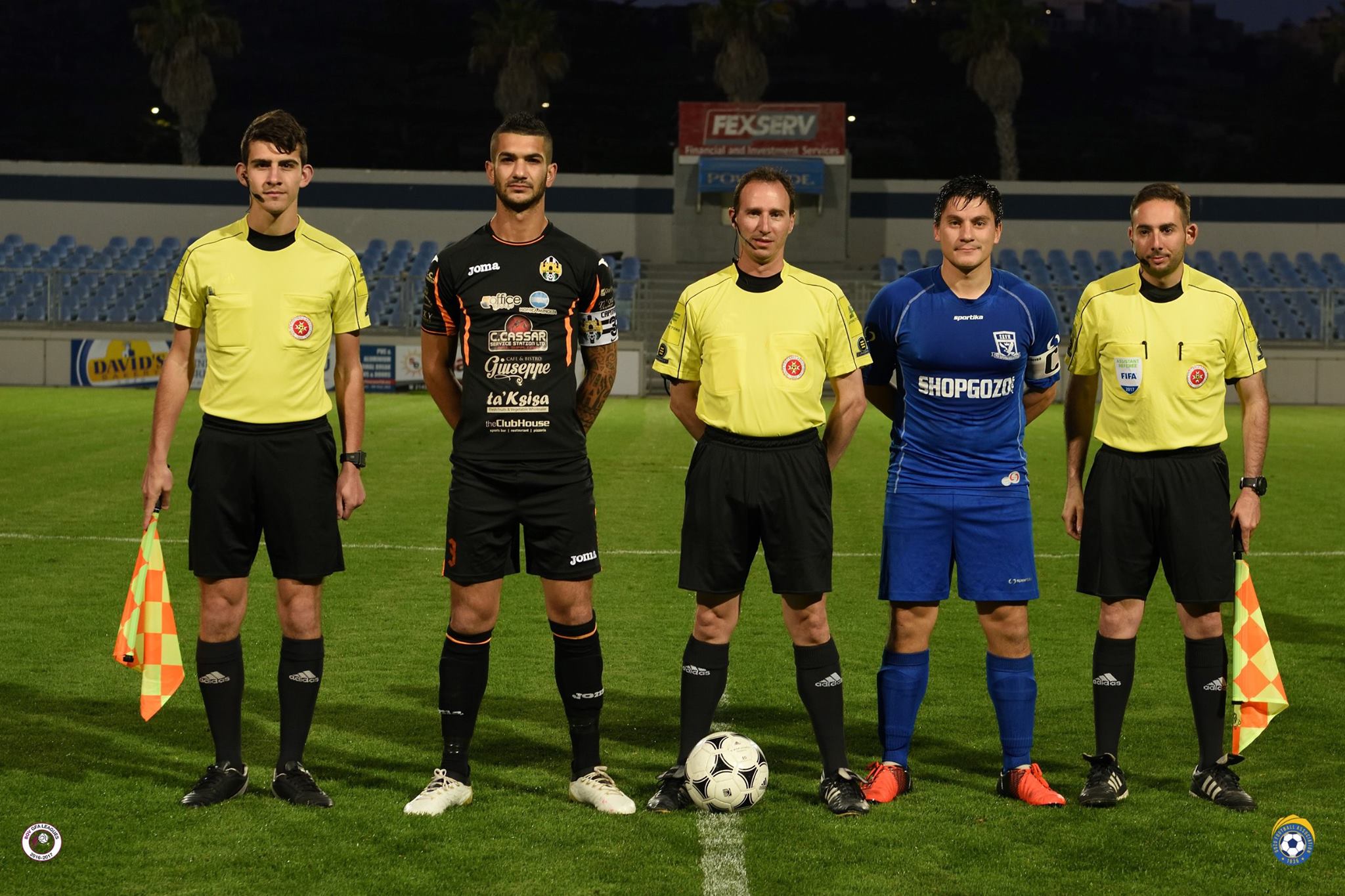 Ghajnsielem’s ambition to make up for the disappointment in the championship by being among the serious challengers for the GFA Cup became more realistic as they obtained a place with the last four teams in the competition with a victory over SK Victoria Wanderers in the match from the quarter finals stage.  The Blacks were determined to hold command of the match and dictated matters for long stretches during the first hour of play.  Ghajnsielem opened a two-goal lead before the end of the first half and scored a third goal at the beginning of the second period.  However, the Blacks lost concentration during the last part of the match and suffered Victoria’s reaction who re-opened the issue for the last fifteen minutes of the encounter by scoring two goals in the space of seven minutes.  The Wanderers had a number of their regular players missing for different reasons and they found it extremely difficult to produce a serious challenge to their opponents during the first part of the match, but managed to show character during the final stages as they believed in the possibility to save the result and to take the match into extra time.

The Blacks could have opened the score in the sixth minute oif play but Ferdinando Apap failed to connect to an inviting corner kick by Chris Camilleri.  On 15 minutes Ghajnsielem’s Edison Bilboa Zarate had a strike form outside the area that hit the crossbar and from the rebound John Camilleri pushed the ball in the net but the goal was disallowed for an offside infringement.  One minute later Ghajnsielem’s keeper Luke Buttigieg was called to make a good save to neutralize an attempt by Victoria’s Milanko Raskovic and on 18 minutes Ghajnsielem’s Renan Telles turned around the Victoria’s keeper inside the area but form his pass Chris Camilleri failed to conclude towards goal.  The wanderers threatened Ghajnsielem’s rearguard on 22 minutes through a fine header by Srdjan Draskovic form a free kick by Igor Grkajac that was turned to a corner with difficulty by goalie Luke Buttigieg.  Ghajnsielem opened the score on 29 minutes through a header by John Camilleri following a cross by Kenny Hili.  The Wanderers seemed shocked and two minutes later Ghajnsielem doubled the score when Victoria’s rearguard failed to clear the ball from a corner kick by Damon Hili and Renan Telles fired in goal from closed distance.  On 34 minutes the Blacks could have added another goal but Emiliano Lattes hit badly from close distance following a header inside the area by John Camilleri.  Two minutes later Ghajnsielem protested for a penalty when Renan Telles ended on the floor inside the area following a challenge with an opponent and on 40 minutes the Wanderers went close to scoring through a lob by Predrag Dordevic when the goalkeeper was out of his position but the ball ended on top of the net.  On 44 minutes Victoria’s Igor Grkajac had a low shot when keeper Luke Buttigieg once again left his goal unattended but the ball ended wide and in the first minute of stoppage time before half time Ghajnsielem’s skipper Ferdinado Apap had a free kick from long distance that was saved with difficulty to a corner by Victoria’s goalie Matthew Vella.

Ghajnsielem had an excellent start in the second period and scored their third goal on 48 minutes through a header by Ferdinando Apap following a cross from the right flank.  On 51 minutes Ghajnsielem lost a good scoring opportunity when Damon Hili’s shot following a cross by John Camilleri passed in front of Victoria’s goal and on 59 minutes a good shot by Renan Telles ended just wide form Victoria’s goal.  As time passed by the Blacks became overconfident and the Wanderers increased their efforts in an attempt to recover the deficit.  Victoria reduced the score on 68 minutes through a shot from close distance by Milanko Raskovic who took the ball from a short clearance by Ghajnsielem’s defense.  On 75 minutes the Wanderers managed to re-open the issue when Igor Grkajac released Milanko Raskovic inside the area and the latter placed in goal with a low shot that was out of the reach of the goalkeeper.  The match became more exciting during the last part but the score remained unchanged.  On 79 minutes Ghajnsielem could have regained a two-goal lead but Chris Camilleri’s strike from outside the area ended wide and just before the end of regular time they also protested for a penalty following a tackle by Nicholas Vellla on Renan Telles  The Wanderers had their best opportunity to force extra time in the first minute of stoppage time but substitute Johann Attard had a shot that ended over the crossbar. 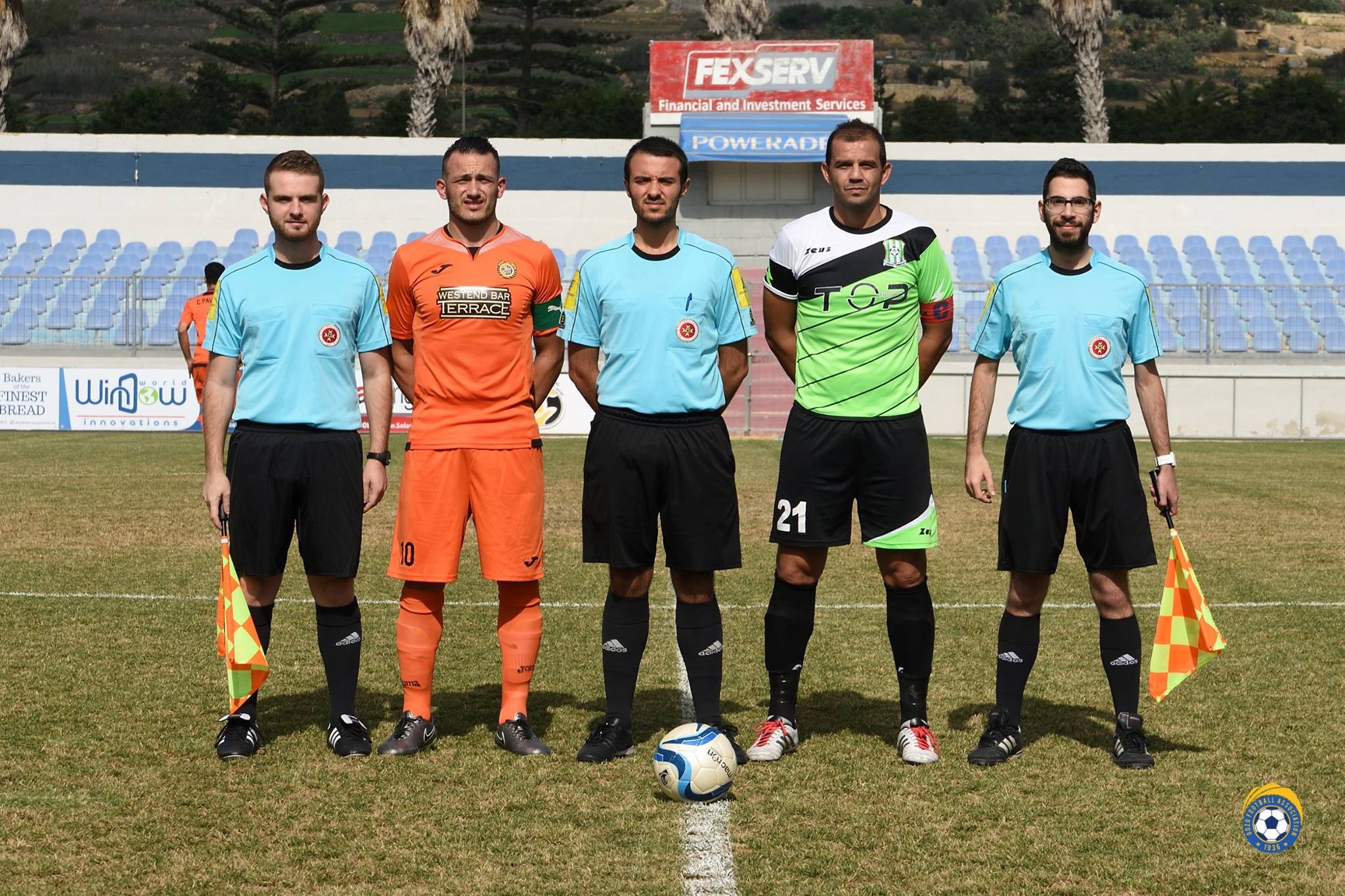 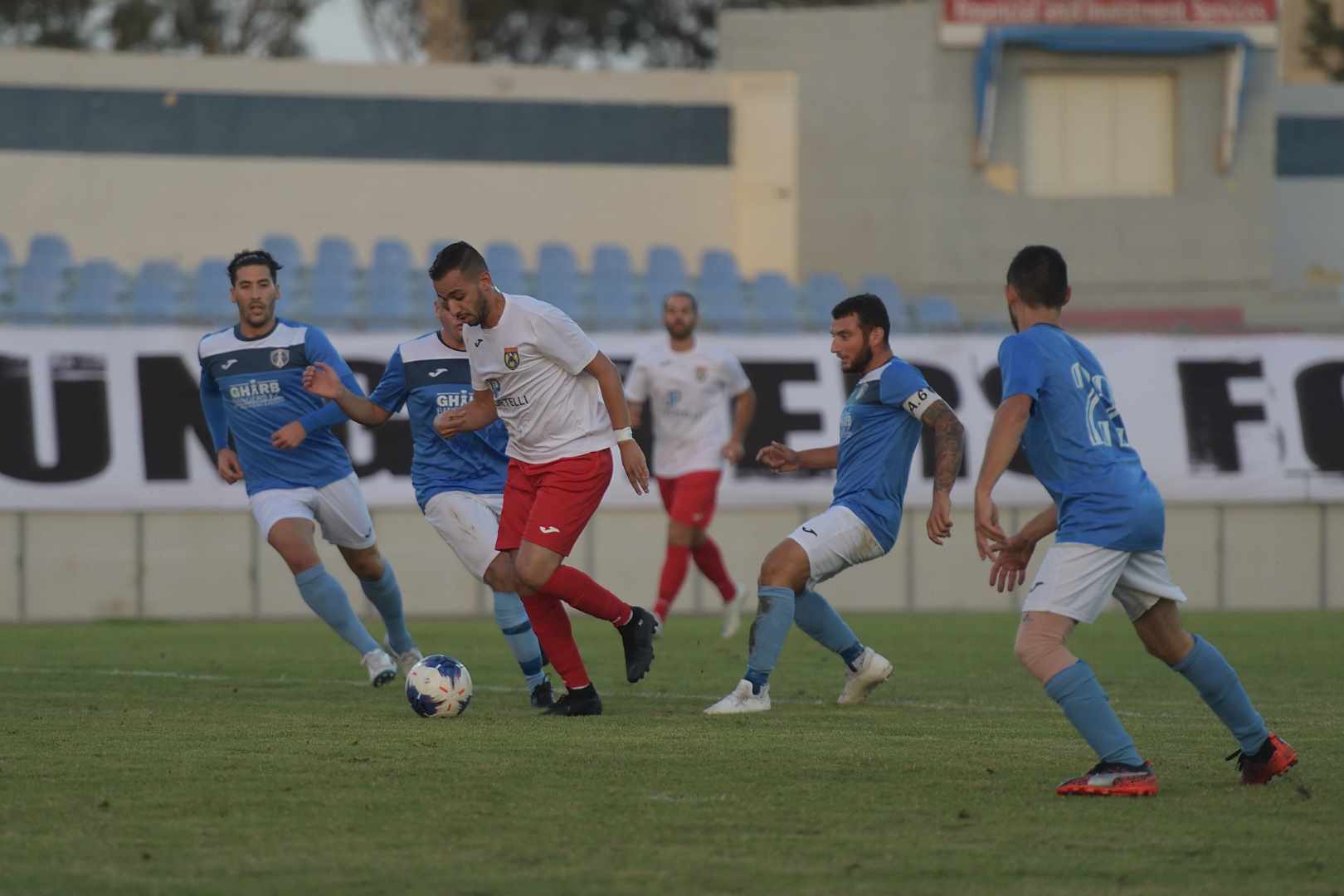 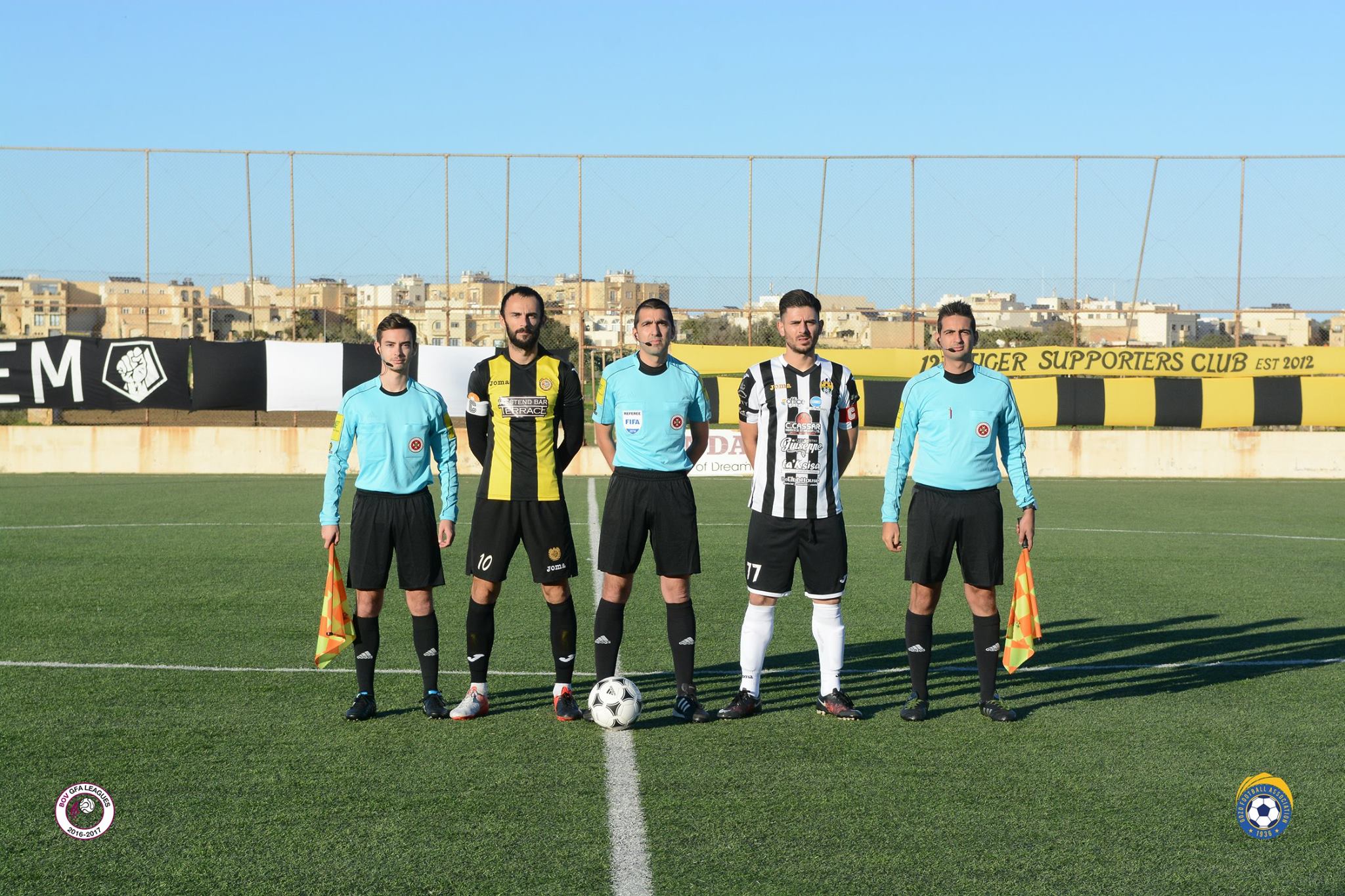 Xewkija Move to the Second Place