Victoria Hotspurs end the 2018/2019 season with the double 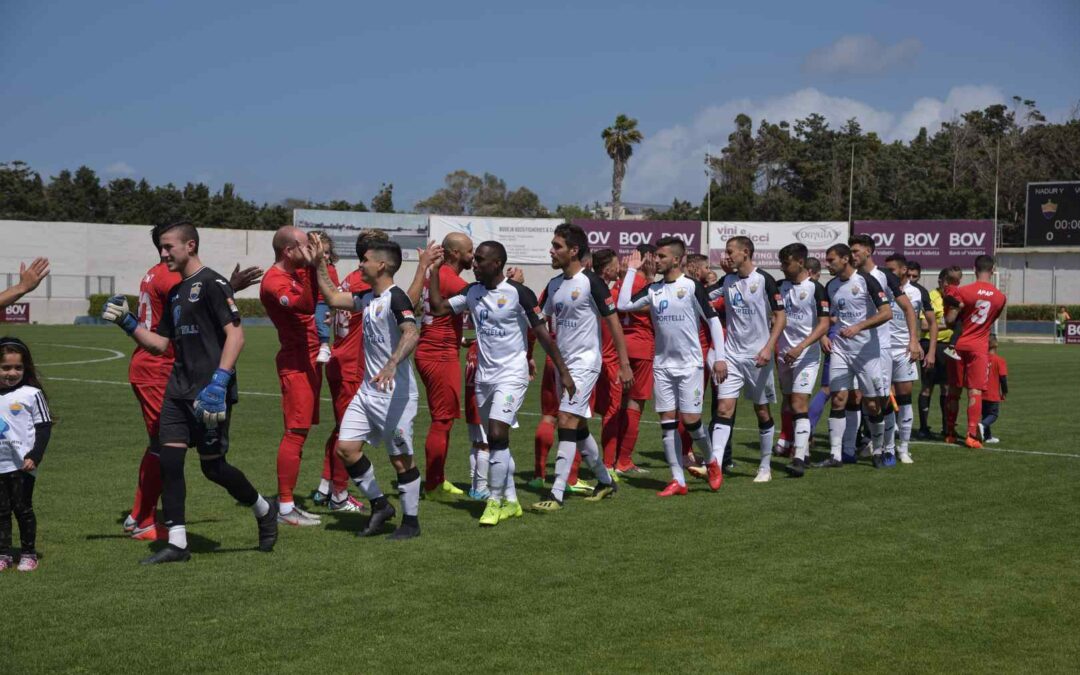 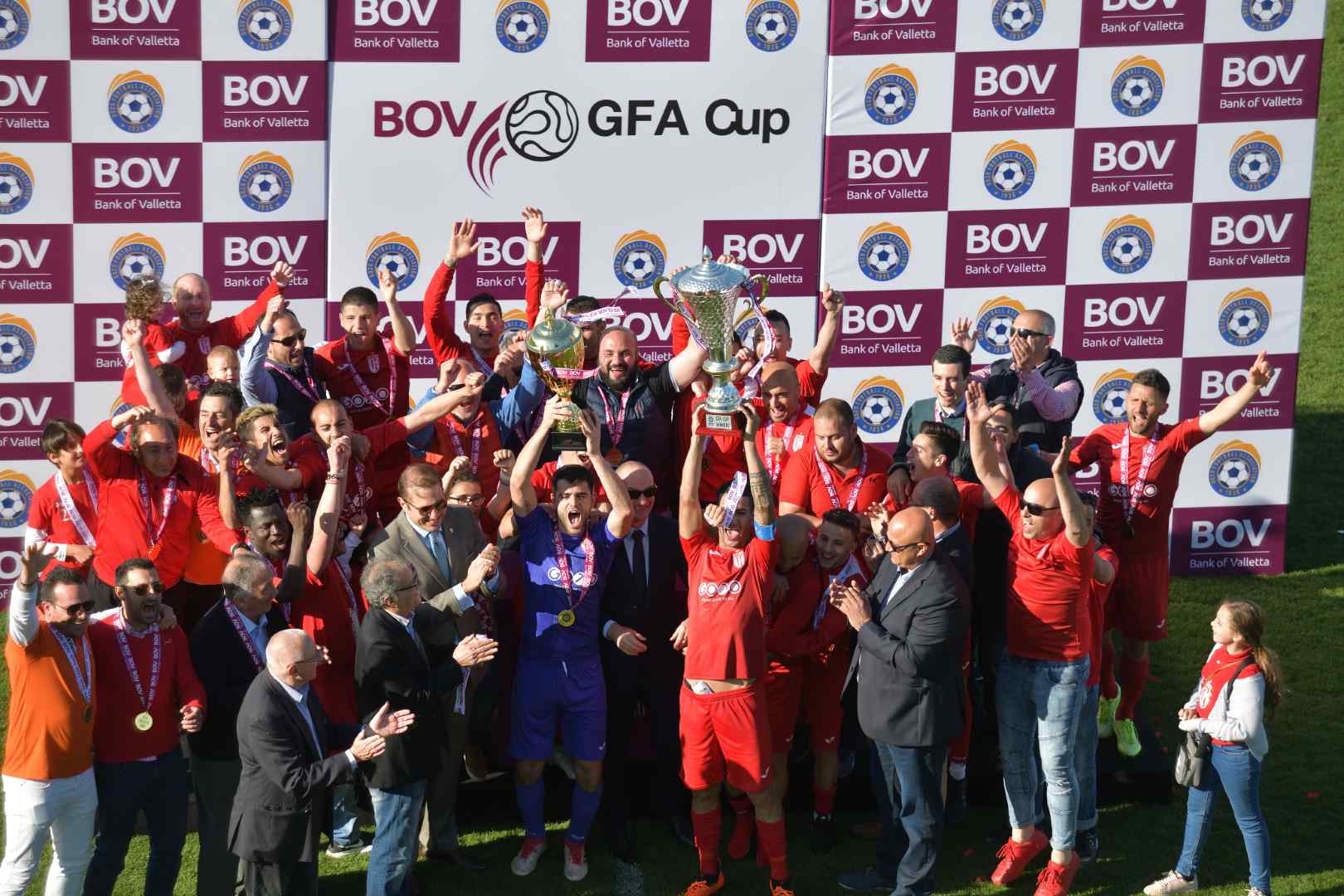 In the last match of the Gozitan football season, which was the final of the BOV GFA Cup, champions Victoria Hotspurs obtained a 3-2 win over Nadur Youngsters so that they made the double for the first time in their club history.  This was also Victoria’s second time that they won this second most important honour in Gozitan football and through this achievement they also extended a successful run that started the previous season as they won two championships, the GFA KO for the first division, the GFA Super Cup and the BOV GFA Cup.

In the final of the 46th edition of the BOV GFA Cup both Nadur Youngsters and Victoria Hotspurs had strong motivation to obtain the win.  Nadur were aiming to end a disappointing season, where they only finished runners up in the championship and also in the GFA KO competition for the first division, by winning the Cup for the ninth time in their club history; while the Hotspurs needed to win this trophy after an absence of more than twenty years.  It was also the fifth direct clash between the two main protagonists of the Gozitan football this season where the Hotspurs won two matches of the championship, the other match of the championship ended in a draw, while Nadur won the match between the two sides at the quarter finals stage of the GFA KO competition for the first division.

The Hotspurs were the favourites to win this competition and as expected they took the initiative of play from the early stages of the encounter.  On 9 minutes the Hotspurs produced a good move but a shot by Henrique Maciel got a deflection by the defence and goalie Gaetano Bugeja managed to block the danger.  Nadur replied on 11 minutes through a shot by Shaun Attatrd that was deflected to a corner by Victoria’s rear guard and from the resultant corner kick, taken by Daniel Mateo Bustos, Luke Tabone headed towards goal.  The defence blocked the ball on the fatal line but form the rebound the same player fired in goal form close distance.  Victoria seemed shocked and Nadur took the driving seat and started to administer play with some authority. The first attempt from Victoria towards Nadur’s goal arrived on 27 minutes when Emiliano Lattes took a short clearance form Nadur’s defence but his shot was weak and Nadur’s keeper neutralised the danger without difficulty.  Nadur doubled the score on the half hour mark through a direct corner kick by Daniel Mateo Bustos that surprised Victoria’s goalie and his defence.  On 36 minutes a shot from outside the area by Victoria’s Jonathan Bajada ended wide and one minute later Nadur could have created more danger but a shot by Marcelo Barbosa form a good position following a personal action ended high.  Nadur could have added another goal on 44 minutes but a good shot by Marcelo Barbosa was saved with some difficulty to a corner by Victoria’s goalie Adrian Parnis.

Nadur created also the first scoring opportunity of the second period that arrived on 49 minutes but an attempt by Leiner Garcia Panesso was blocked to a corner by Victoria’s central defender Daniel Sowatey.  From the resultant corner action Nadur’s Josef Buttigieg saw his attempt neutralised by Victoria’s keeper. The Hotspurs however were more determined and started to put pressure on Nadur’s rear guard. On 51 minutes Victoria’s Henrique Maciel had a good shot that ended high and on the hour mark the Citizens reduced the deficit when Ferdinando Apap addressed towards the goalmouth form a corner kick and Andrew Mizzi was at the right place to push the ball in goal.  The Hotspurs kept insisting and less than two minutes later they levelled the score when a direct free kick from long distance by Shaun Bajada surprised Nadur’s keeper Gaetano Bugeja.  The Hotspurs took full control of play and on 69 minutes a direct free kick by Shaun Bajada ended just over Nadur’s goal.  The Hotspurs were also dangerous in the first minute of stoppage time before the end of regular time but an attempt form a free kick by Elton Da Silva missed the target.  One minute later the Hotspurs could have scored a dramatic goal but a close ranged first timer by Andrew Mizzi following a free kick by Emiliano Lattes was saved with difficulty to a corner by Nadur’s keeper so that the score remained unchanged and the match had to go into extra time.

During the first half of extra time the match continued to be well contested and with few open scoring opportunities as the main strikers were well controlled by the respective defenders.  On 100 minutes the Hotspurs had an attempt through Elton Da Silva that was weak and goalie Gaetano Bugeja saved without difficulty and during the first minute of stoppage time before the end of the first half of extra time the same Da Silva had a header form a corner action that ended wide.  Nadur’s best opportunity to regain the lead arrived on 110 minutes but a shot by Daniel Mateo Bustos missed the target so that five minutes later the Hotspurs scored the goal that decided the final of the prestigious competition when Victoria’s Shaun Bajada passed outside the area to Emiliano Lattes who fired in goal with a low shot that ended at the lower corner of Nadur’s goal.  Nadur’s reaction arrived two minutes later but a shot by Leiner Garcia Panesso ended just over Victoria’s goal.  On 119 minutes the Hotspurs could have sealed the win but Andrew Mizzi’s attempt form an ideal position ended wide.

At the end of the extra time Victoria’s players, officials and supporters started celebrations while the President of the Gozo Football Association Dr Samuel Azzopardi and the Chief Officer of the Bank of Valletta Mr Horace Laudi, together with other GFA officials presented the medals and trophies of the BOV GFA Cup.