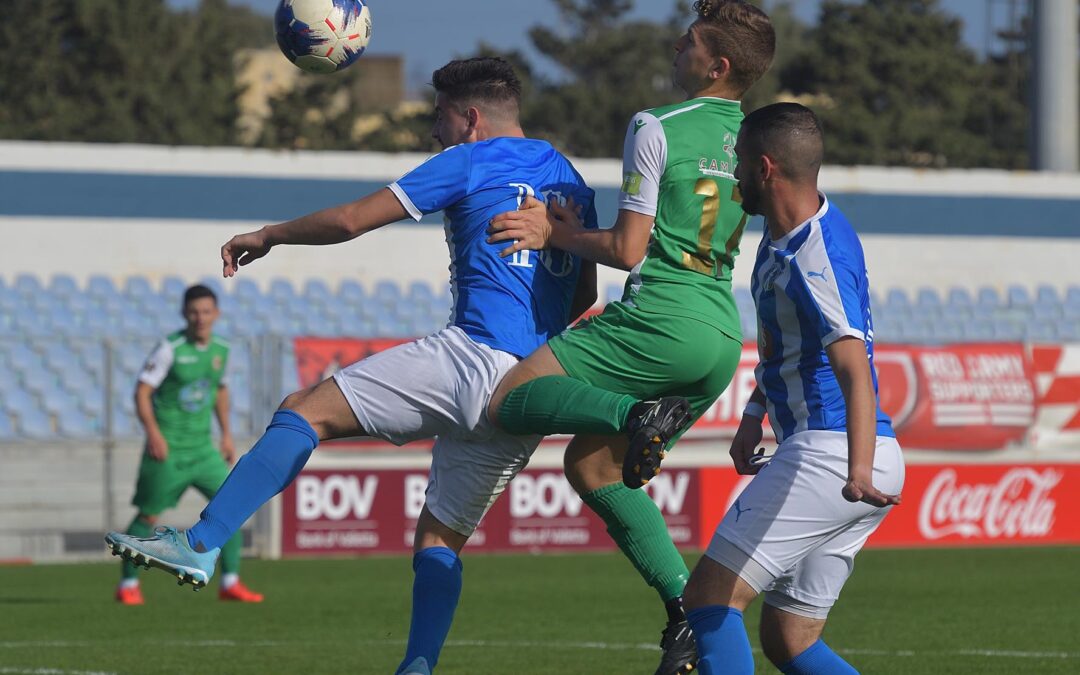 Kercem Ajax scored three goals during the final stages of the match against Gharb Rangers to turn a defeat into a 4-2 win in the last match of the first round for the two sides.  This was another direct clash form the relegation zone as Kercem were on six points prior to this encounter while Gharb were sharing the bottom of the table on three points. With this result Kercem doubled their lead over the teams occupying the bottom of the table and thus ended the first round in a comfortable mid-table position.  On the other hand the Rangers remain in serious relegation trouble together with SK Victoria Wanderers as the two sides ended the first part of the championship with just three points and they both conceded six defeats.

In this match Gharb seemed heading towards obtaining a positive result as they had a two-goal lead at the end of the first half and Kercem were still trailing by one goal with less than ten minutes remaining until the end of the regular time.  However, Kercem were rewarded for their strong character and managed to clinch a win which seemed unreachable for most of the encounter. On the other hand Gharb were punished for some missed chances to consolidate their lead and also for simple mistakes committed at their defence which allowed Kercem to capitalise from each of these occasions.

Gharb came out more determined and managed to score an early goal so that they took the driving seat for the rest of the first half.

4’ Gharb were unlucky when a shot from close distance by Pablo Vinicius Ferreira hit the crossbar and form the rebound Joseph Grima’s attempt was saved by the goalkeeper with the aid of the crossbar to a corner.

7’ (1-0) Kercem’s central defender and the goalkeeper hesitated to neutralise the ball within their territory so that Gharb’s striker Joel Xuereb took the ball and placed easily into an open goal.

12’ Kercem replied through an effort by Darko Krstic who came face to face with Gharb’s keeper but the striker had his lob that ended over the crossbar.

14’ Kercem’s goalie Vladimir Dizdarevic was almost surprised following a cross shot form the right flank by Samuel Sillato but the goalkeeper recovered in time and neutralised the danger.

18’ Kercem produced a dangerous action when Nathaniel Mercieca delivered a low cross from the left flank and Andrea Debrincat passed towards Darko Krstic but the latter hit badly from a good position and the goalkeeper saved without difficulty.

19’ Gharb’s goalie Daniel Spiteri was called to make a difficult save to turn to a corner a strike by Milos Perisic form outside the area.

26’ Kercem were again dangerous through an attempt form the edge of the area following a personal action by Elton Vella that ended just over the crossbar.

27’ Gharb replied through an effort by Pablo Vinicius Ferreira who entered the area but goalie Vladimir Dizdarevic left his position in time and blocked the danger.

36’ A free kick by Kercem’s Darko Krstic ended just over the crossbar.

45’ (2-0) penalty – Gharb were awarded a penalty when Joseph Grima took the ball from Owen Spiteri but the latter committed a foul in an attempt to recover and Haruna Shodija Shola converted from the spot kick.

As expected Kercem produced a reaction after the break and pushed more players forward in an attempt to recover the deficit so that the match became more interesting.

2’ Kercem’s Milos Perisic had a strike from outside the area that ended high.

3’ Kercem once again threatened Gharb’s rear guard when Andrea Debrincat defended the ball inside Gharb’s area but the striker saw his overhead kick that ended over the crossbar.

7’ A free kick by Kercem’s Elton Vella missed the target.

10’ Gharb’s keeper Daniel Spiteri made a difficult save to turn to a corner a close ranged header by Andrea Debrincat following a cross from the left flank.

11’ (2-1) From the resultant corner kick by Nathaniel Mercieca, Gharb’s defence failed to clear the ball and Andrea Debrincat netted with an overhead kick from close distance.

13’ Gharb replied with a good action inside Kercem’s area by Joseph Grima after receiving form Haruna Shola, but the former hit badly and the ball ended wide.

14’ Kercem went very close to level the score but a fine shot by Milos Perisic hit the post with the goalkeeper beaten.

25’ Gharb’s Camillo Andres Babilonia produced a spectacular ‘coast to coast’ personal action that started inside his area but his final attempt fr0om an angled position was blocked to a corner by Kercem’s substitute Thomas Vella as the goalkeeper was already outplayed by the same Babilonia.

33’ Gharb operated a counter break but a lob by Olimpio Gabriel Fernandes ended over Kercem’s goal.

36’ Gharb went very close to regain the two-goal lead when Haruna Shola released Joseph Grima on the right flank and the latter entered the area but his low shot was stopped by the far post when the goalkeeper was beaten.

38’ (2-2) Gharb were punished for the missed chance as Kercem levelled the score when the Rangers awarded a free kick to their opponents from an action that should have been controlled by the defence and Darko Krstic placed directly from the set-piece towards the far post and out of the reach of Gharb’s keeper.

42’ (2-3) Kercem turned the result in their favour when a clearance by Gharb’s keeper arrived to an unmarked Jean Paul Mizzi who took the opportunity and lobbed into an open goal form long distance.

45+3’ (2-4) Darko Krstic took the ball from Gharb’s defender near the corner, entered the area and from his low inviting pass Thomas Vella placed in goal with a low drive. 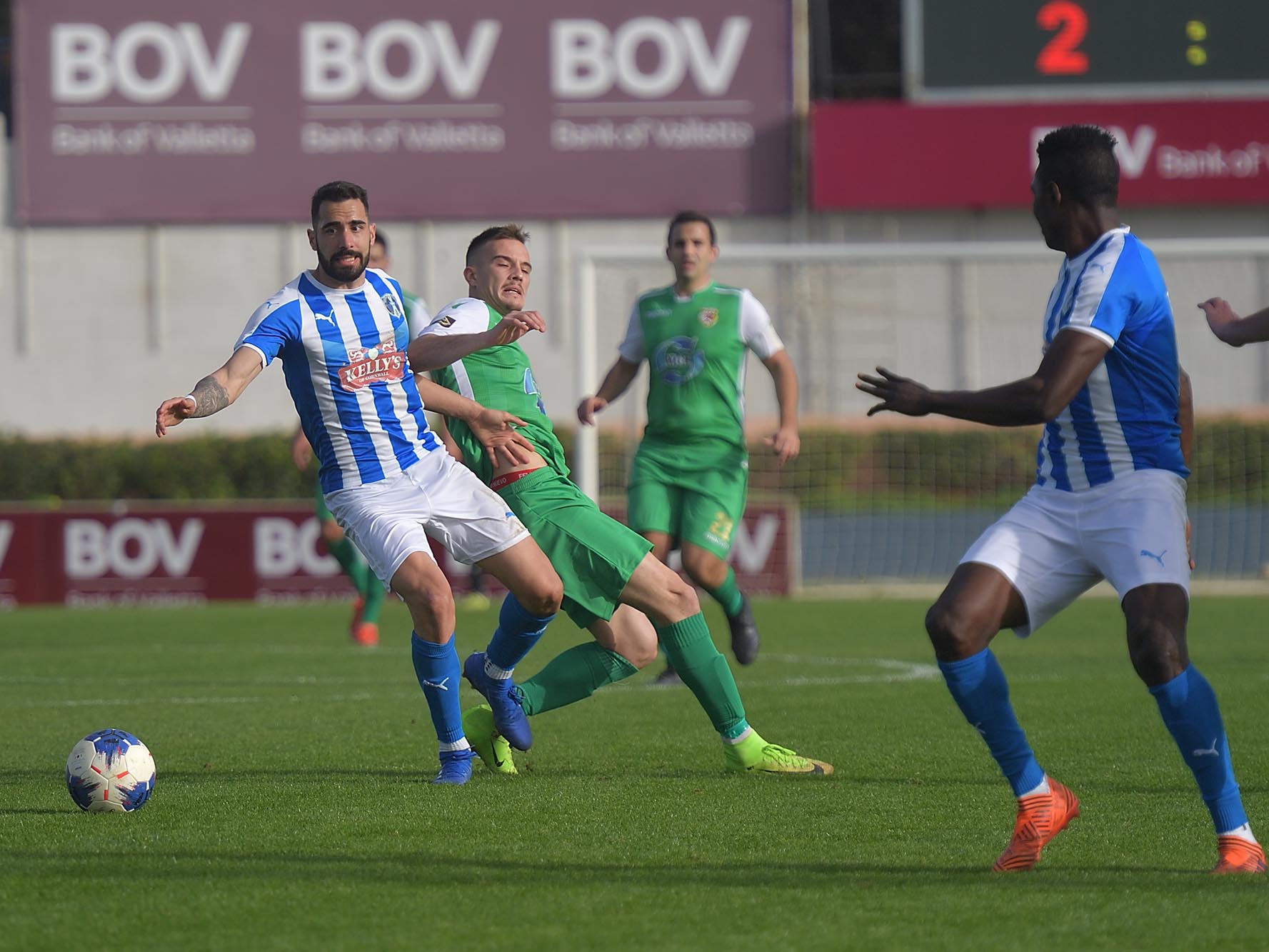 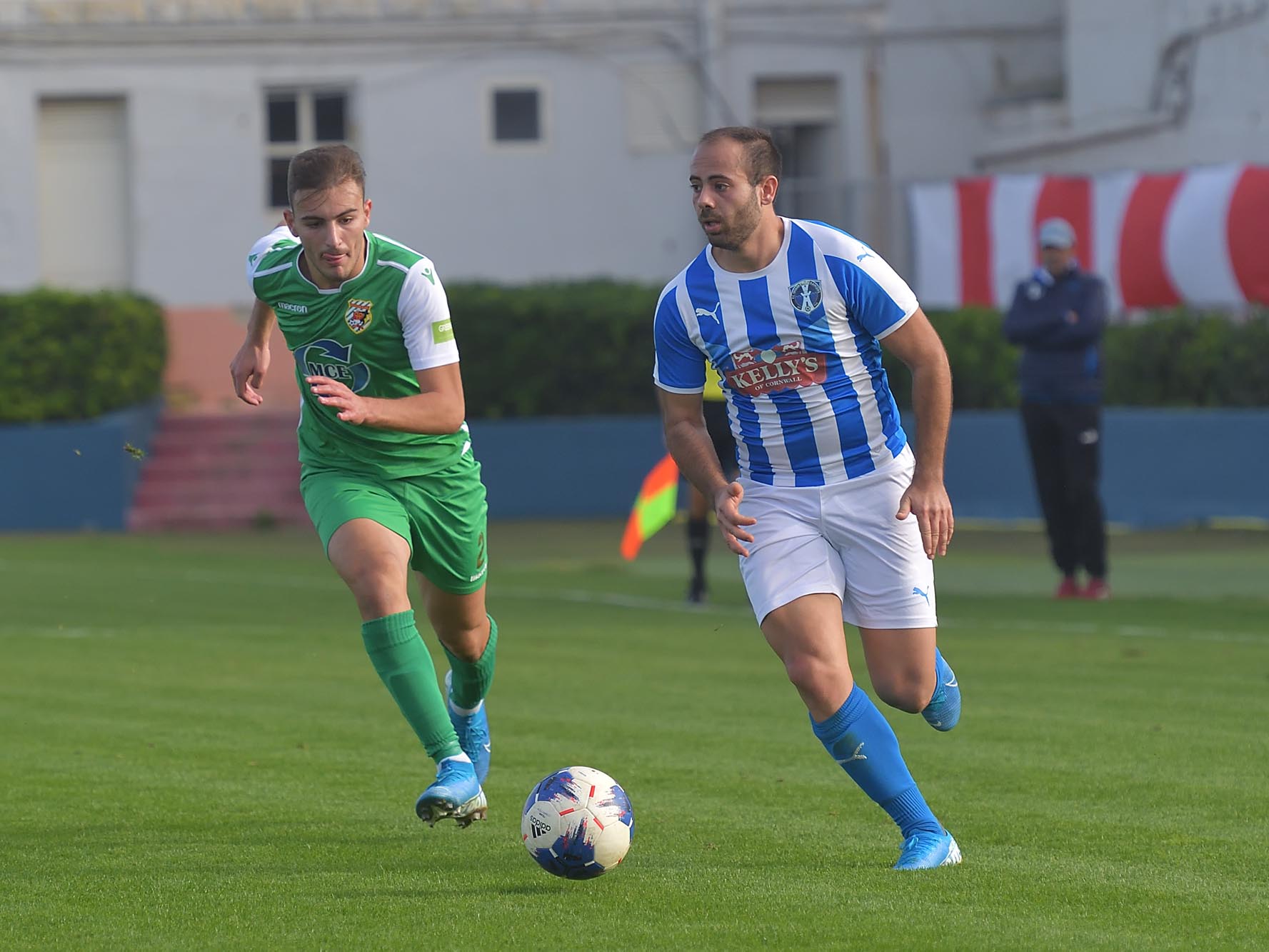 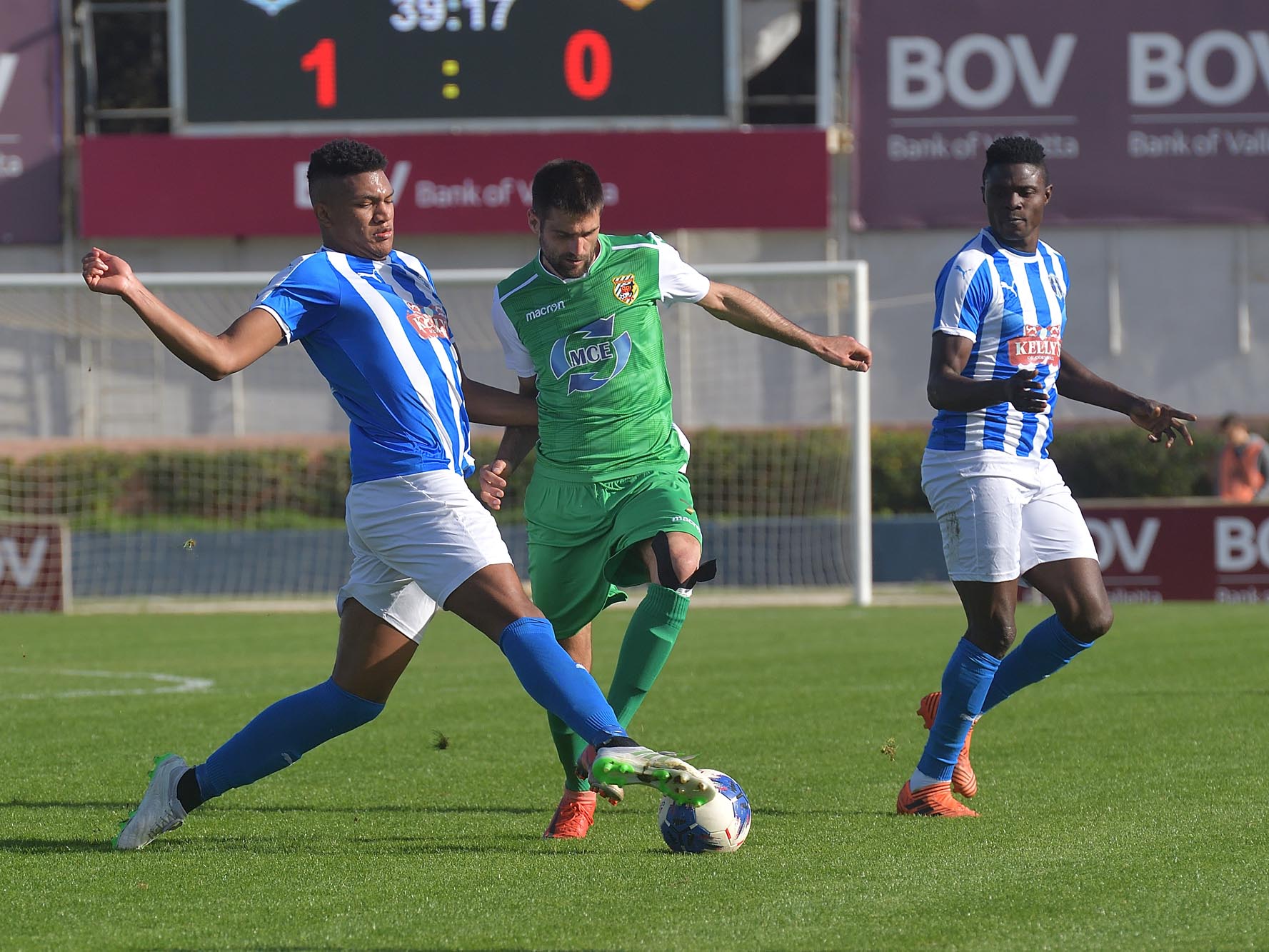 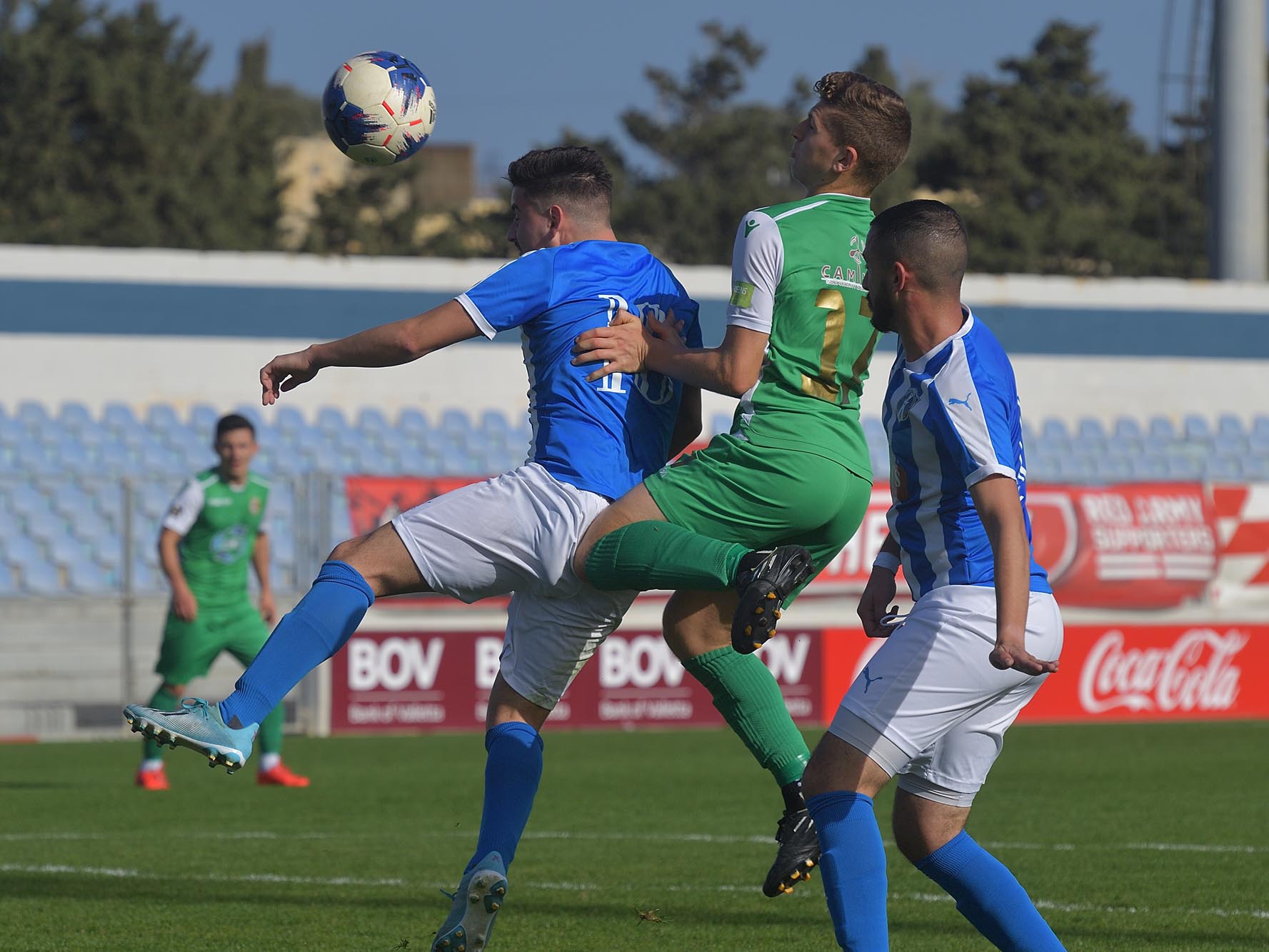