Kercem extend their gap from the red zone 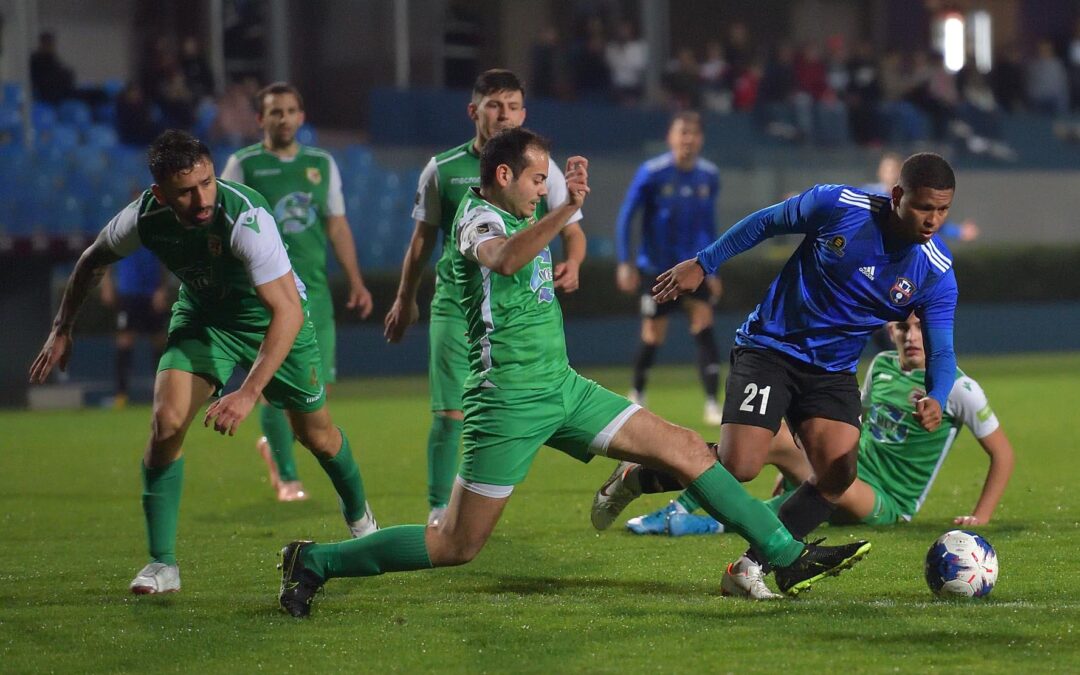 Kercem Ajax registered their second win in a row as they scored a goal in each half from the match against Xaghra United, and with the points obtained they consolidated their mid-table position which keeps them away from the relegation zone.  With this result Kercem repeated the win with the same score over Xaghra in the match from the first round of the championship. The match was well contested during the first hour of play as the two sides were aiming for the full points at stake.  Xaghra remained in contention for most of the time but they became demoralised as soon as they conceded the second goal so that the win for Kercem could have ended up with a larger margin.

Play during the first half was quite balanced and the two sides produced some good scoring opportunities.

1’ Xaghra almost surprised Kercem after only twenty seconds of play as Kenny Hili entered the area from the right flank but form his low pass Luis Andre De Melo Lima’s shot was blocked by the defence.  The ball arrived to an unmarked Marlon Mamo who had his attempt cleared form the goalmouth by Xaghra’s rearguard.

11’ Kercem created their first serious scoring opportunity through a half volley by Andrea Debrincat following a cross by Josiah Buttigieg that was well saved by Xaghra’s keeper Lorjean Xuereb.

12’ The same goalkeeper was called to make a difficult save following a strike form outside the area by Milos Perisic.

13’ Xaghra produced a dangerous action inside Kercem’s area and protested for a penalty when Joseph George Vella ended on the floor following a challenge with his direct opponent.

25’ (1-0) Kercem opened the score with a fine lob from outside the area by Elton Vella that ended into an open goal as the goalkeeper was out of his position.

38’ Xaghra could have levelled the score but a header on the run by Joshua Buttigieg following a cross by Kenny Hili was stopped by the post.

45’ The last opportunity for Xaghra to level the score before half time arrived through a shot by Rodrigo Ost Dos Santos that missed the target.

Play continued to be quite balanced during the opening stages of the second period.

9’ Kercem’s keepr made an important inytervntion when he managed to save a low cross by Xaghra’s Joseph George Vella and thus denied the scoring opportunity to Xaghra’s Luis Andre De Melo Lima.

17’ (2-0) Kercem doubled the score when Milos Perisic released Darko Krstic inside Xaghra’s territory and the latter entered the area and placed easily into an open goal as he came face to face with the keeper.

27’ Kercem were in the driving seat and Xaghra’s goalie Lorjean Xuereb made another difficult save to turn to a corner a free kick by Kercem’s Jean Paul Mizzi.

37’ Xaghra had an opportunity to reduce the score when Luis Andre De Melo Lima passed to Nebojsa Biculjevic inside Kercem’s area but the latter saw his effort blocked to a corner by Kercem’s keeper Vlaimir Dizdarevic.

42’ Kercem could have capitalised better when Xaghra’s rear guard cleared badly inside their area and the ball arrived to substitute Borja Polo Longarela who had his first timer that ended away from goal.

43’ Kercem were once again close to scoring when the other substitute Gabriel Muscat turned around his direct opponent inside Xaghra’s area but form his pass the shot by Andrea Debrincat was saved with difficulty to a corner by goalie Lorjean Xuereb.  From the same corner action the ball arrived to Kercem’s substitute Anthony Zammit who had his attempt that was also saved by Xaghra’s goalie.

45+1’ Kercem protested for a penalty when Josiah Buttigieg ended on the floor inside Xaghra’s area as he was trying to create the space before concluding towards goal.

45+1’ Kercem lost another opportunity to seal the win with a third goal but a shot form a good position by Darko Krstic ended wide.