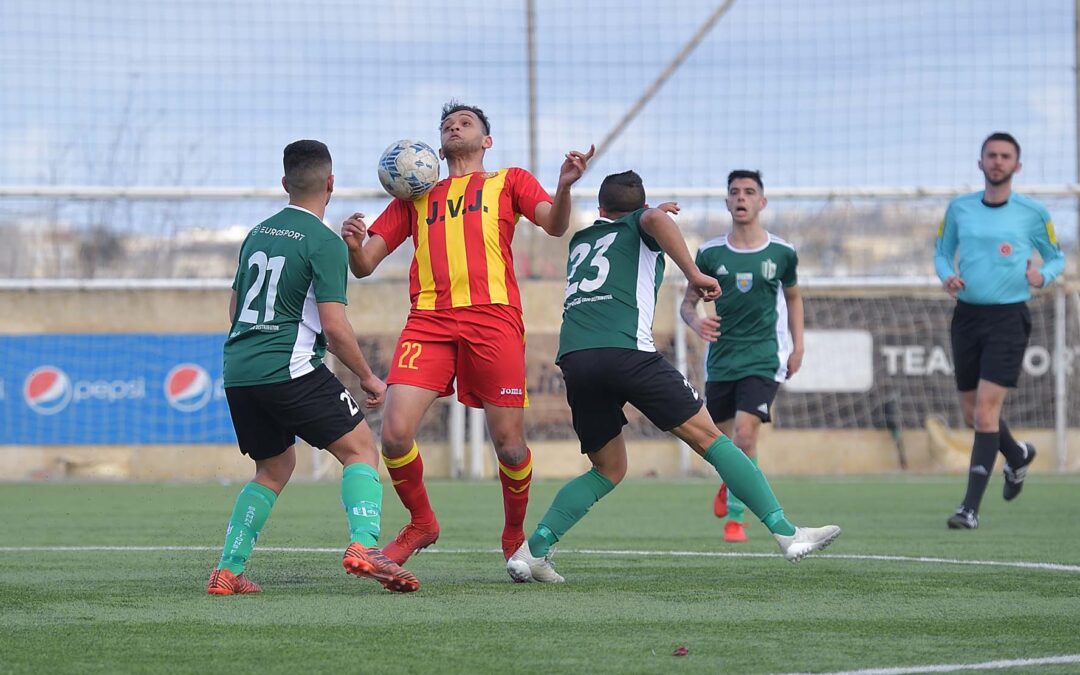 Sannat Lions recovered from the defeat conceded in their previous match and obtained three precious points from a 2-0 win over St Lawrence Spurs in the first match from the fourth and final round of the campaign. Sannat’s win was well deserved as they saw more of the ball and also created more scoring opportunities than their opponents. However, St Lawrence tried hard to obtain the first positive result from the matches against Sannat in the campaign and had some opportunities where they could have surprised their more quoted opponents, but at the end they conceded two late goals that compromised the possibility to leave the field of play with at least a point.

Timeline:
2’ Sannat passed through a risk when central defender Joseph Buttigieg had his back pass to his goalkeeper that was almost intercepted by St Lawrence’s striker Mohammed Senussi Telessi but goalie Matthew Muscat recovered in time and cleared the ball from the danger area.
7’ Sannat had their first attempt towards St Lawrence’s goal through a shot by Joseph Zammit that ended wide.
10’ Sannat went very close to open the score when a short clearance by St Lawrence’s defence arrived to an unmarked Ryan Grech but the latter saw his shot from outside the area that was saved to a corner with the aid of the crossbar.
22’ Sannat created another good action through a low shot by Joseph Zammit following a personal action that was well saved by goalie Angelo Brignoli.
27’ St Lawrence operated a counter break and were unlucky as a low drive by Mohammed Senussi Telessi was stopped by the base of the post when the goalkeeper was beaten and Sannat’s defender Fabian Xuereb cleared the danger to form the goalmouth.
33’ Sannat went again close to scoring through a shot from outside the area by Joseph Zammit that was well saved by St Lawrence’s goalie Angelo Brignoli.
45’ St Lawrence were once again unlucky when a shot from long distance by Charlon Farrugia was stopped by the crossbar.
HT (0-0)

Play continued to be quite interesting as the outcome remained uncertain for most of the encounter.
7’ St Lawrence were dangerous through an attempt from a free-kick by Charlon Farrugia that was neutralised by goalie Matthew Muscat.
15’ St Lawrence Spurs operated another good move where Charlon Tabone entered Sannat’s area but his low shot was partially saved by goalie Matthew Muscat and from the same action the same Tabone delivered a cross towards the far post but Karl Formosa’s shot ended away from goal.
36’ (0-1) Sannat opened the score when Christian Vella passed through St Lawrence defence with personal action and released Joseph Zammit so that the latter fired in goal from a close distance.
37’ (red card) St Lawrence were reduced to ten players when Matias Camilleri Psaila was sent off for a second bookable offence for a foul in the midfield.
39’ Sannat were again dangerous through a shot by Joseph Zammit that was saved by goalie Angelo Brignoli.
42’ The same goalkeeper was called to make another intervention to save a free-kick by Joseph Zammit.
45+1’ (0-2) Sannat made sure of the win when Joseph Zammit entered St Lawrence’s area from the right flank and from his low cross, Daniel Borg concluded easily in goal.
FT (0-2)