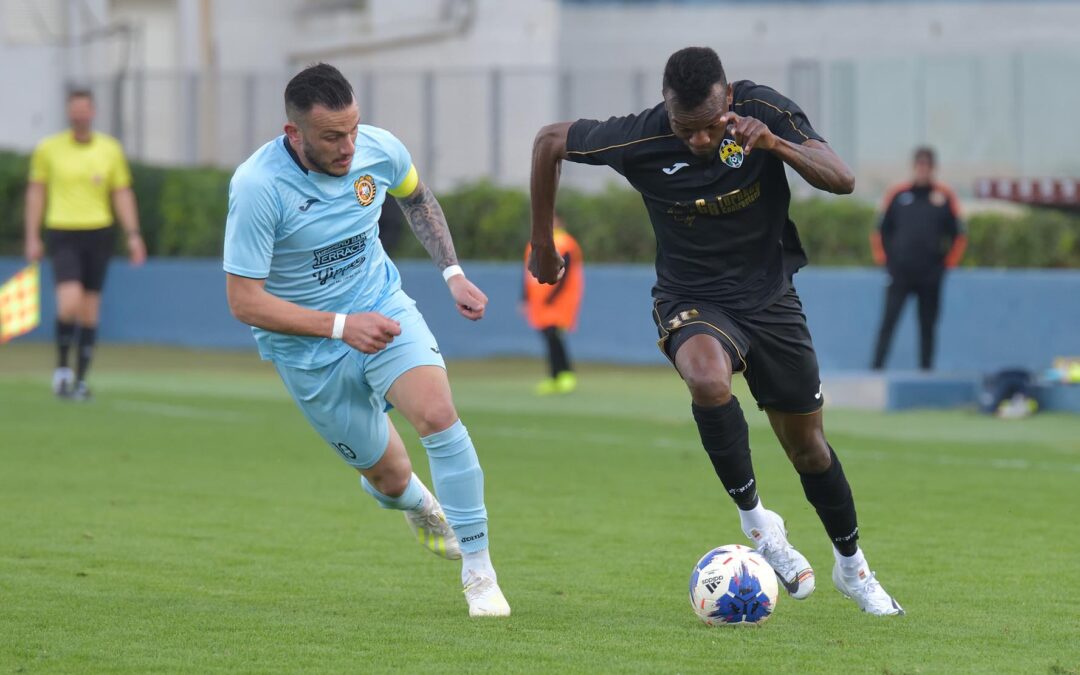 Ghajnsielem took the third spot on the table with three points obtained from a 5-3 win over Xewkija Tigers Ghajnsielem confirmed a positive moment of form and also the possibility that they can be competitive with the top teams in the category. On the other hand, Xewkija lost an opportunity to keep close to the current leaders on the table and saw their gap increased to eight points at the end of Match-Day 10 of the championship. Ghajnsielem’s win matured with goals scored after the break as the Blacks were trailing by two goals at the end of the first half. Xewkija, who had Jackson De Lime missing due to a suspension and goalkeeper Mark Grima who is out of play due to an injury, actually suffered Ghajnsielem’s play during the second period and also ended the match with a player less on the field as a player who was sent off for a second bookable offence.

Ghajnielem seemed more motivated from the early stages but during the first half, Xewkija managed to be in control of play and were much more effective in the offensive play.
1’ Xewkija’s goalie Leonard Camilleri left his position in time to block an initiative by Ghajnsielem’s Igor Nedeljkovic.
2’ Ghajnsielem protested for a penalty when Igor Nedeljkovic ended on the floor inside Xewkija’s area following a challenge with his direct opponent.
7’ Xewkija replied with a good action when Claudio Antunes passed to Jose Carlos Nogueira Junior who entered the area but the latter had his low shot that was neutralised by goalie Franklin Vella.
14’ Xewkija’s keeper Leonard Camilleri was again called to make a good intervention following a free kick by Sebastien Martinez Turizo.
15’ Ghajnsielem had a good shot by Ishmael Belhadj following action by Jhon Arboleda Valencia was blocked by Xewkija’s defence.
16’ In another dangerous action by Ghajnsielem, Xewkija’s goalie failed to take the ball from a free-kick by Sebastien Martinez Turizo but Asante Agyeman hit badly from a close distance and the ball ended over the crossbar.
25’ (1-0) Xewkija opened the score when Claudio Frances delivered inside Ghajnsielem’s area following a short corner kick by Jose Carlos Nogueira Junior, the defence failed to clear the danger and Claudio Antunes controlled well and fired in goal from an ideal position.
27’ Ghajnsielem protested for a penalty when Jhon Arboleda Valencia was challenged inside Xewkija’s area and ended on the floor.
28’ (1-1) penalty – Ghajnsielem were awarded a penalty for a challenge by Xewkija’s defender Dylan Mercieca on Igor Nedeljkovic and the same striker levelled the score with his shot from the spot-kick.
32’ (2-1) Xewkija regained the lead when Claudio Frances won the ball from Ghajnsielem’s defence and from his cross, Jose Carlos Nogueira Junior controlled the ball and fired in goal with a fine shot.
38’ Ghajnsielem could have levelled the score but a first-timer by Michael Bezzina after receiving inside Xewkija’s area from Jhon Arboleda Valencia was well saved by Xewkija’s keeper.
42’ (3-1) penalty – Xewkija were awarded a penalty for a foul by James Tabone on Jose Carlos Nogueira Junior and the same Brazilian striker increased the lead for his side with the shot from the spot-kick.
HT (3-1)

Ghajnsielem were not demoralised and came out for the second period with a strong determination to recover the deficit.
1’ The Blacks could have produced more danger but a header by Igor Nedeljkovic following a corner kick by Sebastien Martinez Turizo, ended away from Xewkija’s goal.
3’ (3-2) penalty – Ghajnsielem were awarded a second penalty for a foul by Manwel Xerri on Jhon Arboldea Valencia and Igor Nedeljkovic converted from the spot-kick.
9’ (3-3) Ghajnsielem kept insisting and levelled the score when Jhon Arboleda Valencia took the ball following some hesitation to clear the danger by Xewkija’s central defender and the goalkeeper so that the striker netted with a low drive.
11’ (3-4) Xewkija continued to suffer pressure and Ghajnsielem turned the result in their favour following a counter break where Ismael Belhadj released Igor Nedeljkovic who entered Xewkija’s area and lobbed easily over the goalkeeper who was out of his position in an attempt to block the danger.
17’ Xewkija were also reduced to ten players as Joseph Mario Vella was shown a second yellow card for a foul in the midfield on Kevin Farrugia.
23’ Xewkija tried to produce a reaction despite the fact that they had a player less on the field and had an opportunity to level the score but a free kick by Claudio Antunes missed the target.
25’ In another good offensive action by Xewkija a shot from an angled position by Jose Carlos Nogueira Junior ended on the side of the net.
34’ Ghajnsielem’s keeper Franklin Vella was called to make a good intervention to block a free kick by Claudio Frances.
36’ Xewkija had another opportunity from a free-kick but the attempt by Jose Carlos Nogueira Junior ended away from Ghajnsielem’s goal.
Ghajnsielem became much more dangerous during the final stages of the encounter.
40’ The Blacks could have added another goal when Jhon Arboleda Valencia entered Xewkija’s area but from his inviting pass, Ishmael Belhadj had his shot that ended wide.
41’ In another good action by Ghajnsielem a shot from outside the area by Michael Bezzina ended high.
44’ (3-5) Ghajnsielem practically made sure of the three points when they operated a counter break and Igor Nedeljkovic exchanged the ball with Jhon Arboleda Valencia and the former concluded in goal with a low shot and the ball ended in the net despite the attempt by the goalkeeper to block the danger.
45+3’ Ghajnsielem’s substitute Nemanja Stojanovic entered Xewkija’s area with personal action by his shot from a good position ended wide.
FT (XT 3 – GHJ 5)