Qala Saints obtained a close win with the odd goal from three in their match against Munxar Falcons from the Qualifying Round of the BOV 2nd Division Cup so that they become favourites to earn the qualification to the final at the end of the round-robin.  The Saints, who are currently dominating the BOV Gozo Football league of the second division, confirmed their good moment of form and with this win they also become favourites to aim for the double in the lower category this season.

Both Qala and Munxar were aiming to obtain the three points from this encounter as it was the first match for the two sides in the competition.  Once again the clash between the two sides was well contested as the Falcons showed that they have the potential to give the stronger challenge to the Maroons this season.  Qala’s win matured through a brace by the prolific striker Ebube Ralph Okpokwu, with a goal scored in each half.

During the opening minutes of the match play took place mainly in the midfield as the two defensive departments prevailed over the respective strikers for most of the time.

20’ (1-0) Qala opened the score in their first serious action within Munxar’s territory as Ebube Ralph Okpokwu received the ball from a throw-in at the edge of the area and fired in goal after releasing himself from his direct opponents.

25’ Munxar protested for a penalty when Ayesller Carvalho tried to produce a personal action within Qala’s area but ended on the floor when challenged by the defence.

Qala gained some territorial supremacy near the end of the first half.

30’ The Maroons had a strike from outside the area through Manwel Xerri but the ball got a deflection and ended in a corner.

34’ Qala could have added another goal when Stefan Farrugia came face to face with Munxar’s keeper but the striker saw his attempt from an ideal position that ended wide.

37’ Qala were again dangerous through a shot by Samwel Muscat that was saved in two attempts by Munxar’s keeper Daniel Galea.

Qala maintained their momentum after the break.

1’ After just 42 seconds of play the Maroons went very close to double the score when Stefan Farrugia passed easily through Munxar’s defence but his shot was saved by goalie Daniel Galea with the aid of the crossbar.

10’ (1-1) Qala were punished for the missed scoring opportunity as Munxar levelled the score through a low shot from an angled position by Ayesller Carvalho following a personal action, with the ball hitting the post before hitting the net.

16’ (1-2) Qala regained the lead when Munxar’s goalie Daniel Galea partially saved with the aid of the crossbar a strike by Charlon Farrugia and from the rebound the same goalkeeper blocked a shot by Stefan Farrugia and form the resultant melee Ebube Ralph Okpokwu fired in goal from close distance.

26’ Munxar went close to level the score but a header by Robert Grima from a corner kick by Luke Meilak ended wide.

30’ Munxar had another attempt directly from a free kick by Ayesller Carvalho that ended just high.

32’ Qala operated a counter break through substitute Martin Buttigieg who passed through Munxar’s rear guard but his low shot was saved by the goalkeeper with the aid of the post.

42 Munxar’s goalie Daniel Galea kept his side in contention when he managed to block a shot by Stefan Farrugia following a personal action and form the rebound the defence managed to clear the danger.

45’ Qala were once again unlucky and hit the woodwork for the fourth time when a shot from outside the area by Martin Buttigieg, following a short clearance by the defence, that was stopped by the crossbar.

END_OF_DOCUMENT_TOKEN_TO_BE_REPLACED 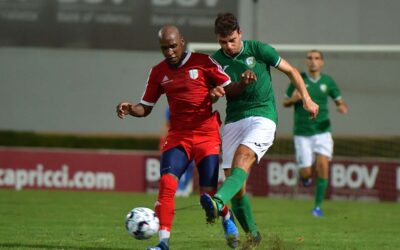 Oratory Youths earned their first points in the championship with a win over Sannat Lions in the last match of Match-Day 3.

END_OF_DOCUMENT_TOKEN_TO_BE_REPLACED 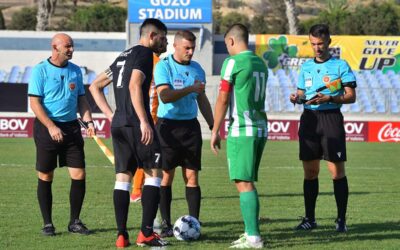 Ghajnsielem join Nadur at the top of the table

Ghajnsielem replied to the win registered by rivals Nadur Youngsters by obtaining the full points at stake from a convincing win over Kercem Ajax.

END_OF_DOCUMENT_TOKEN_TO_BE_REPLACED 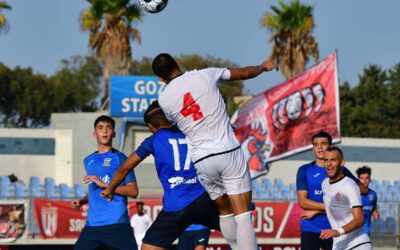 Victoria Hotspurs obtained a 3-1 win in the derby match against SK Victoria Wanderers so that they moved to a more comfortable mid-table position after obtaining just one point in their previous two matches.